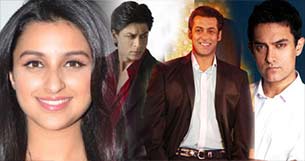 Actress Parineeti Chopra was recently reported to have said in an interview to a magazine that she is not working with the Bollywood Khans - Salman, Shah Rukh and Aamir - because she would have nothing to do in the film.

However, the four-film old actress has clarified and said that her statement has been blown out of proportion.

"I would just like to clarify a bit on that (what I said in that interview). That comment was blown out of proportion. It was an answer to a question that I was asked," Parineeti told reporters here Thursday at the launch of Yash Raj's fashion store Diva'ni.

"I was asked if I was offered a film with senior actors. To that I answered, 'Yes, I have been offered those films but I didn't have much to do, so I did chose not to do'. I did not specifically take anybody's name," she added.

Parineeti, who made her acting debut with "Ladies vs Ricky Bahl" in 2011, feels it is not wise to make such an insensitive statement.

The 25-year-old said: "I am too new an actor to do something like that. I think it is a very insensitive thing to say if any actor says that."

So far, she has worked with young actors only, be it Arjun Kapoor, Sidharth Malhotra, Ranveer Singh or Sushant Singh Rajput.

Her next films are "Daawat-e-Ishq" and "Kill Dil", in which she is again working with young actors like Aditya Roy Kapoor, Ranveer and Ali Zafar, respectively.