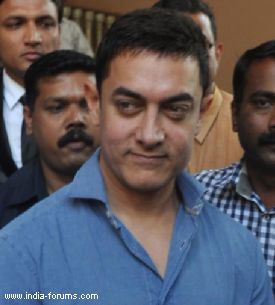 Actor Aamir Khan Wednesday revealed he might not have been a superstar if it weren't for the advice 'do what your heart says' by his great grand uncle, Muslim scholar and nationalist Maulana Abul Kalam Azad.

During his opening address at the 2014 Apeejay Kolkata Literary Festival (AKLF) here, Aamir recalled the leader had instilled confidence in Aamir's uncle, producer Nasir Hussain, to join the film industry, in the wake of family protests.

This had spurred Hussain and Aamir's father, producer Tahir Hussain, to join showbiz.

"He (Nasir Hussain) mentioned to me ... when he was a young boy and came out of college and was very interested in films ... in the creative field and he wanted to be a writer ... the entire family was against and was dissuading him from joining the film industry and he said: 'I went and I met Azad saheb. He (Azad) said don't listen to anyone ... do what your heart says. He was the only person who supported me'."

Aamir thanked Azad for the critical piece of advice that, according to him is responsible for his being in showbiz.

"So I thank him for the advice he gave to my uncle."

AKLF, running till Jan 13, will celebrate the secular views of Azad to coincide with his 125th birth anniversary.