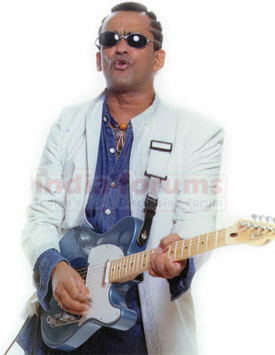 Remo D’souza, the choregrapher who started his career with Rangeela and has created magics like Ishq samandar... in Kaante and many other films, shares his struggling days... Q. Old school and college days of an unknown Remo D'souza...
A. I studied in Jamnagar, Gujarat. I did my 12th from there and during my HSC board exam I realized that I don't have any interest in studies. I immediately left school and landed in Mumbai to struggle.

Q. Who was your guru at that time?
A. I did not have any guru because at that time in Jamnagar there was no MTV or Channel V. I am talking about 1985 to 1992. I loved dance since my early childhood and used to perform during school functions and all that kind of occasions. But my craving to learn more about dancing is what brought me to Mumbai.

Q. How were you inspired to leave your place?
A. It was only dance. Whatever I have learnt about dance until now is by my own. I haven’t taken any professional training. I learnt it by watching movies, music videos etc. I would rather say Michael Jackson is my guru as I used to copy his steps watching him dancing in his videos and then choreograph my own steps by adding something extra.

Q. Your journey from Jamnagar to Mumbai…
A. Like everyone, I, too, came here with lot of expectations of becoming a star. One of my friends came to pick me up when I landed in Nana Chowk. He used to live in Chawl and my first reaction was ‘Oh my God where have I landed!’ Reaching Bombay and residing in a Chawl was like the biggest shock in my life. I stayed there for two days and then went to Mira Road to stay at my friend's brother's flat from where I started my struggling period.

Q. Please tell us about your struggling days…
A. At the beginning I had no source of income and consider myself lucky to be staying with a very sweet family. I didn’t have any money to pay them initially and they, too, didn’t ask for it. After few days I opened a dance class by the name of Super Brats at Churni Road. I along with three of my friends soon opened two more branches of the institute, one in Andheri and other in Borivali. I used to travel to Churni Road in the morning, take the class there, come to Borivili for the second class and then catch the train to come to Andheri for my last class before I can go home.

Q. How many students did you have?
A. Initially we had four students and gradually it increased. We got money in that way but there was a season of it, you don't get student all throughout the year. The rainy seasons were really bad. At one point I had literally no money; not even to give to the people with whom I was staying as paying guest. I lied to them that I had my classes and would come after two days. For those two days, I stayed at Bandra station without having food.

Q. And when did you feel you have got a right break which would end your struggling period…
A. It was in All India Dance Competition that our team came first and we got noticed. At that time, Ahmed Khan was working on Ram Gopal Varma’s Rangeela and was on the look out for fresh faces. He auditioned us and we got selected. At the beginning I was rejected because of my dark complexion and unattractive features whereas Ahmed wanted chikna and gora-gora ladka. But luckily Ahmed’s assistant knew about my dancing skills and insisted him to take me in the film. So, I got selected again for Rangeela’s first song, Ai re ai re… That time Ram Gopal Varma loved my character so much that he used to keep me in all his scenes. If you see the film you will notice that it opens with my close up with me sitting and having a bidi. That was my first big break as a dancer and having a close up and opening shot in 70mm screen in Hindi film is a very big thing which made my career. From there I started assisting Ahmed.

Q. Your first independent assignment…
A. After assisting Ahmed Khan for one year, I got the confidence to take on an independent project. But at the same time, I was worried as for that I would have to leave Ahmed and then if the project didn’t click, I would be nowhere. It was Anubhav Sinha who gave me my first video. It was Sonu Nigam’s album Deewana. Luckily the video was a big hit and later I worked on many more videos along with Anubhav and others. There was time when I was working on four music videos in one day. As far as film is concerned, I got my first break in Hansal Mehta’s Dil Pe Mat Le Yaar, which unfortunately didn’t do well at the box office. It was again Anubhav Sinha who gave me his film Tum Bin which proved to be a big hit. But the real breakthrough I got is from the film Kaante where my choreographed item number Ishq Samundar… proved to be a major success.

Q. With whom did you use to share your sad or happy moments at that time?
A. I shared my happy and sad moments with the pardeshi family who kept me in their house. Really, if they weren’t there to allow me I would have to leave Mumbai as my father was forcing me to get into Air Force. But my mother supported me and I was given six months time for my struggle.

Q. Did you have any plan to get through your struggling period?
A. Actually, you can't plan anything in this industry. If your luck and hard work is there it will happen. I think planning is not there in Bollywood dictionary. You will have to stick to the thing you want to do.

Q. Experience of your first day at shooting as an independent choreographer…
A. After choreographing so many music videos, I was no new face in this industry. But I was a bit tensed as because it was my first film. At the same time I felt very proud, too.

Q. How was your first taste of success?
A. After Tum Bin and Kaante proving to be hits, I was on the seventh heaven actually. I was flying and was saying that I have arrived (laughs). I was feeling like ‘I have done it’. And slowly I started getting many other offers and was feeling great. My parents were also feeling very proud of me.

Q. What is the future of Remo, the choreographer and Remo, the human being?
A. If you are good as a human being then you get everything. I would just like to work on films in the future. My recent projects as choreographer includes films like Love Story 2050, Kidnap, Bhootnath, Just Gone, De Taali and Rock On. If everything goes well, I will start my next Hindi film as a director.