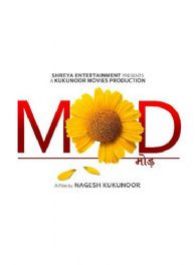 New Delhi, Oct 1 Filmmaker Nagesh Kukunoor believes in 'reinventing' and 'rethinking'. He says he tries to stay away from formulas and has just made his first love story, 'Mod'.

'Filmmaking is a very selfish process and this is why I constantly attempt different genres because I get bored if I repeat myself. I try to rethink and reinvent, as for me, the joy of filmmaking lies in trying new things every time,' Kukunoor told IANS in an interview.

The Hyderabad-born engineer-turned-filmmaker is known for narrating movies in a very unconventional way. So far he has done well with his low-budget, high-on-content movies like 'Hyderabad Blues', 'Rockford', 'Iqbal' and 'Dor'.

Now the 44-year-old filmmaker is keen on exploring three other genres - horror, action and sci-fi. His forthcoming film 'Mod' is releasing Oct 14.

'This is the first time I am making a love story. It is an old fashioned romance with different treatment which also has certain mystery about the characters,' he said.

Just like a typical Kukunoor film, the star cast of 'Mod' is interesting with VJ-turned-actor Rannvijay Singh and Ayesha Takia in the lead roles.

And if Kukunoor is to be believed, Rannvijay might be the surprise package of the film with his 'serious' image.

'Rannvijay had auditioned for the role. The one thing I always look for in any actor is honesty and that is what I saw in him. I am sure post-'Mod' his rugged, biker boy and macho image will get a makeover and he will be seen a soft, shy and sensitive guy. I am sure he will pull off this new image really well,' he said.

Kukunoor admits he wants to work with big names but doesn't unnecessarily want to fit them in a role where they might overpower the essence of the character.

'Sometimes there are stories where you don't want a star to overpower the concept or the idea. When you have big stars in a movie, they bring along a big baggage of expectations and an image,' he said.

'And hence they overpower the character. But there are times when you have such strong characters that you want the audience to understand it rather than the star taking away the juice with his charismatic image. So, whatever the script demands, I bring in that element,' he added.

Kukunoor can also be considered one of the pioneers of low-budget cinema when he bowed in with his debut film 'Hyderabad Blues' in 1998. He shot it in flat 17 days with a budget of Rs.17 lakh.

Over the last few years, small-budget films have done well at the box-office and the filmmaker believes the audience is ready for innovation and experimentation.

'The audience has always been welcoming when it comes to accepting change and innovation. It is great that such kind of cinema is happening, but again, it is so easy for the industry to fall back,' he said.

'Even today, if you have a fantastic script but don't have muscle backing from a big production house, things are still very difficult,' he added.

To ensure that small-budget films reap benefits at the box-office, ticketing prices should be altered, Kukunoor feels.

'Ticket prices for low budget films have to be changed because people won't go and shell out so much money on something which is not their type of commercial cinema,' he said.

(Ruchika Kher can be contacted at ruchika.k@ians.in)

Priyanka Chopra praises Sonu Sood as UNDP confers him with ...
44 minutes ago