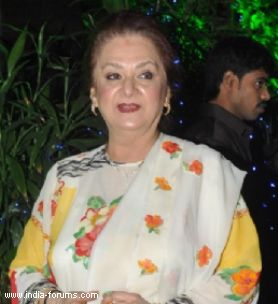 Yesteryear actress Saira Banu remembers Nanda as "gentle, soft spoken and so unassuming" and added that she saw a lot of her mother's traits in the late actress.

"I met her very late. We began interacting when my husband worked with her in B.R. Chopra's "Mazdoor" in 1982. But we struck an instant rapport," said Saira Banu.

"Nanda baaji, that's what I called her, was a Capricorn just like my mother. I saw a lot of my mother's beautiful traits in Nanda baaji. She was gentle, soft spoken and so unassuming.

"She would always say, 'When I have to go, I want to go without getting in a hospital and going through a lot of pain.' It seems god does listen to good people. She went exactly the way she had hoped she would. She came out of the bathroom at 7 a.m. and collapsed. That was it! When death has to come, it should be instant."

Nanda died Tuesday following a heart attack. She was 72. She acted for about four decades in over 65 titles including hits like "Gumnaam" and "Jab Jab Phool Khile".

Nanda took retirement in 1995 and after that she stayed away from the media glare. Saira Banu says that the late star was a private person and only mingled with a set of friends.

"Not many knew Nanda baaji well. She had a tightly cordoned set of friends - Jabeen (Jaleel), Shakila and Waheeda (Rehman). Later that group was extended to Helen, Sadhana and Asha Parekh. Like I said, I came into Nanda Baaji's life very late. But the time we spent together was incredibly fruitful.

"Like all actresses of our generation, she was thrilled to finally work with my husband. She told B.R. Chopra saab that even if it is just one frame, she would happily share it with Dilip saab as this would complete her career.

"My husband immediately took to her because she was the well known Marathi actor Master Vinayak's daughter. He said something to her about her father in Marathi and Nanda baaji was blown away. 'How can he speak such fluent Marathi?' she wondered," said Saira Banu.

She added that Nanda was a foodie, but later she became a frugal eater.

"Nanda baaji would come home to be with us. We would sit and chat on my bungalow's terrace. I'd serve her delicacies of shrimp and tikkas and other non-vegetarian stuff that she enjoyed at our home.

"She was a foodie earlier, but later on in life she became a frugal eater just nibbling on food. And then eventually she stopped taking dinner altogether."

Nanda's beautiful home used to be filled with the chatter of relatives and siblings, said Saira Banu.

"Gradually her relatives passed away and she was left with two brothers. I loved her gentle soft spoken demeanour. There was nothing crass or materialistic about her. She was happy to be who she was and with whatever she had. She wasn't money minded at all. As an actress I saw her in two of her films 'Jab Jab Phool Khile' and 'Choti Bahen'. She had a serene quality to her on screen.

"The one thing that she did not have and I do is a soulmate and a life companion. She was ready to marry (filmmaker) Manmohan Desai and then tragedy struck. I don't know what happened," she said referring to Nanda and Desai's engagement in 1992, but the filmmaker died in 1994 after falling from his balcony.

“They Saw An Opportunity To Tear Down A Black Girl” - Misha B From ...