View Profile
Possessing a beautiful face and a mesmerizing smile, Ayesha Takia is one such actress who is capable of winning over people with her acting performance as well as sweet talk. Another interesting thing about Ayesha is that the cutie has been able to win applauses from the audience both for her roles in serious films as well as in comedy movies. Soon Ayesha will be seen in an interesting role in Rohit Shetty’s comedy thriller ‘Sunday’. Recently, we caught up with Ayesha and during a brief encounter she talked about her film ‘Sunday’, her upcoming projects and plans for the future. Here are the excerpts 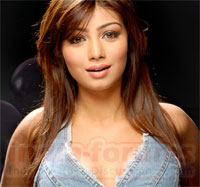 Q: Tell us something about your character in ‘Sunday’.
A: In this film, my character’s name is Sahar who works as a dubbing artiste for a cartoon network. She is a very forgetful kind of a girl and cannot remember things of the past and as a result she is often in problems.

Q:  This is the first time that you are portraying a dubbing artist. Did you need to take any special preparation for this?
A: Actually Vikash, who had trained Tussar Kapur for the dumb character in ‘Golmaal’, has helped me a lot in doing this role to perfection. Simultaneously, I used to watch a lot of cartoon films at home to prepare myself for the role which demanded that the facial expressions of the artist should match his voice. While doing this role I have often noticed that the expressions of some dubbing artists are very loud and on the other hand, some people’s appearances are so funny that I often used to feel ashamed. I loved doing this role as it provided me with an opportunity to learn a lot of things.

Q: While preparing for the role you have watched a lot of cartoon shows. Which among them is your favorite?
A: I personally liked ‘Donald Duck’ and Mickey Mouse’ a lot and this is also because of  the voice-overs in these shows. I also liked ‘Tom and Jerry’, but this is a silent cartoon show and hence I did not get much to learn from this show.

Q: Would you call this a return to your childhood days?
A: (Laughingly) No, it is nothing like this. But it is also true that I have never spent so much time watching cartoon networks and now it looks so strange. I remember initially when I used to watch the cartoon networks, my dad used to come and tease me saying that I was watching cartoons at this age and I used to smilingly reply that I am merely preparing for my role. Then he used to remind me that I would do the same thing when I was a kid.

Q: What has been your experience working with co-stars?
A: I have enjoyed a lot working with everyone. There were four men – Ajay, Arshad, Irfaan and Rohit – in the film and I was the lone girl. But I have never felt any difference working with them and even joked with them. Ajay is not only a sporting person, but also very protective. Many people have told me that he is prankster, but I have always found him to be an introvert. Irfaan too is very much like Ajay, but Arshad is a funny person and always made us laugh with his jokes and pranks. And what should I tell about Rohit, he was the director, but still one of us. While working he was serious, but rest of the time, he was like a friend.

Q: In this film there is an incident where you miss a Sunday. How do you spend your Sundays in real life?
A: (Laughingly) Sundays were very attractive to me since my school days as it would be a holiday. I always feel very upset when I miss a holiday in real life. On Sundays I wake up late and do all my work leisurely. And there is a special fun in watching television shows on this day.

Q: After ‘Sunday’ what else is in the pipeline?
A: I am working in Boney Kapoor’s ‘Wanted’ which is a remake of ‘Pokhri’ in Tamil. I am doing the role of a gym instructor who doesn’t have a father and she works to look after her mother and younger brother. I am also working with Nagesh once again, but I don’t know whether the film 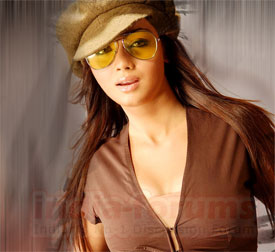 will be titled ‘8 by 10’ or ‘Tasveer’. This is a big budget psychological thriller and here I am opposite Akshay Kumar. The film is a story about a couple from Canada. In addition, I am doing ‘De Taali’ for E Nivas and the film is based on the topic of friendship. Aftab is opposite me in this film, which is a wonderful movie like ‘Soncha na tha’.

Q: Since the beginning of your career you have concentrated on career-oriented films rather than masaala films. What is your take on this?
A: Actually, I am fortunate that in the initial days of my career I have got good offers. I am also grateful to the audience who have appreciated my performances in ‘Soncha na tha’ and ‘Dor’, otherwise these days an artiste’s fate is sealed between hit and flop films. This year my first release is ‘Sunday’ and I have a lot of expectations from this movie as not only the film is good, but also because it involves good actors and a talented director.

Q: According to you, are you a serious actor or a comedy film actor?
A: I consider myself both. For instance, ‘Dor’ is such a film that even after 20 years I would feel proud to talk to my children about my performance in the film. On the other hand, I have done some light or comedy films. I am of the opinion that as an actor, I should act in both kind of films because acting in a particular type of film would not only put a stamp on an actor, but also bore him or her.

Q: What was the reason that made you accept a film like ‘No Smoking’ after doing a successful movie like ‘Dor’?
A: Look, there can be no comparison between ‘Dor’ and ‘No Smoking’. I don’t want to do any film that will have all the ingredients of a Bollywood masaala, but the film should provide me with ample opportunity to perform.

Q: Some of your films like ‘Salaam-E-Ishq’ and ‘Fool and Final’ flopped despite having big names and great casting. What is the reason behind this?
A: If has often been seen that when we expect a lot of things from something, it generally deprives us. It is mostly a matter of luck and chance. As you just said, ‘Salaam-E-Ishq’ flopped despite having a big star cast. It feels very bad because it was basically not a bad film, but definitely a long one. The problem with “Fool and Final’ was that people took this as a serious film, when we had made it clear in the promos that the audience should take the movie lightly. Although these are not thought-provoking films, I enjoyed doing them very much.

Q: In Bolywood, the audience generally appreciates male comedians rather than female comic actors. Do you feel that the audience will do justice with your performance in ‘Sunday’?
A: I sincerely pray that the audience appreciate my performance as a comedienne  in the movie. My favorite woman comedians in Bollywood are Sridevi and Juhi Chawla and I am sure that everyone will accept this. To tell you honestly, I would prefer to do comedy roles to wearing low cut blouses like the present day heroines.