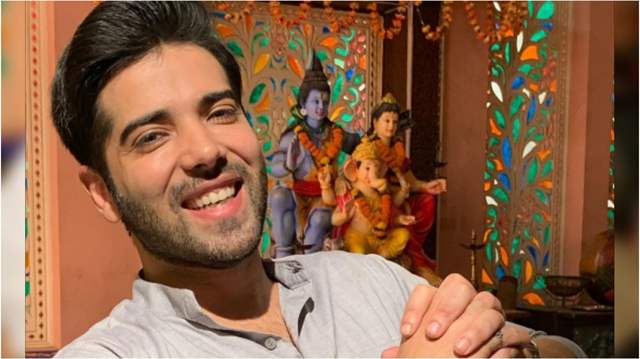 Star Plus show ‘Pandya Store’ has managed to keep the fans glued to the screens. The show has taken an intense and dramatic turn with a major twist in the plot. As per the current track, ‘Pandya Store’ catches fire leaving the entire family shattered. They try to save their ancestral property but in vain.

Gautam being the eldest son took the responsibility of running the store all by himself while his three brothers were young. He gave his all to make sure that his father’s shop runs well and maintained the dignity of the family. However, in the recent turn of events, the store caught fire leaving Gautam devastated. Seeing his most prized possession burn to ashes and the helplessness that he felt was portrayed brilliantly by actor Kinshuk Mahajan.

India Forums got in touch with Kinshuk and congratulated him for his performance in the scene and asked him about his thought on filming the scene and if he enjoyed doing the same, he said, “The scene was extremely intense and honestly, I didn’t really enjoy it because it felt like giving away my soul to that particular scene”.

We asked about the brief that he followed for the sequence, he said, “I imagined losing my mother and felt the pain that Gautam is facing. Thinking about the same, I performed and I feel it turned out decently. I wanted to show the pain through my eyes more than anything”.

When asked about the feedbacks that he received, Kinshuk added, “The ardent fans of the show felt for their Gombi and they loved the sequence. My co-actors and the unit members appreciated me for the same leaving me content”.

Show some love for Kinshuk Mahajan in the comment section below.

+ 3
4 months ago Gombi had max leverage of dialogues and screen space , he did alright! Kinshuk deserves applause for how he has transformed gombi from 22 yr young with responsibilities to 33 year old passive brother , who is trapped in partiality. His dual standards & different attitudes to dev & shiva - kinshuk brings that glaring injustice on screen well. He also does well as gombi Who is, after all these years of experience & all- still is not careful enough to get insurance for his business. Nor this experienced b.s.b.b. (Baap samaan badaa bhai) checks contractors enough to make sure proper permits are taken- be it adding floor on house or store. Gombi’s attitude amongst brothers- he has No clue as to why his brother left studies , toiled at store at young age to lessen gombi’s burden - he is too enchanted by dev’s education. Gombi is uniquely soft gray character that way. Not to forget : no matter how much pain, heartbreak gombi faces, he was as is , as was on early days when it comes to scenes with Dhara - that too inbetween emotional scenes of hurt gombi missing dev! 👏🏼 These kind of sequence flips in Gombi’s character are unique as they bring forth bipolarish switch that KM adds in back to back scenes of Gombi, commendable! It explains us confused viewers metaphor of Gombi’s characteristic partiality!🙂

+ 6
4 months ago Kinshuk You were outstanding and brilliant in the whole Fire episode today 🔥👍👏 . Completely outshined everyone and You were Actually the STAR for today's episode 👍👏 #KinshukMahajan