View Profile
His perfect comic timing and powerful acting makes Rajpal Yadav get noticed even in the small roles that he does. Perhaps, that's why he is so popular among the masses. After portraying the character of Rambha Bhai in "Ramgopal Varma Ki Aag", the actor will be next seen in Priyadarshan's "Dhol", also starring Tusshar Kapoor, Kunal Khemu and Sharman Joshi. Although reluctant to talk about his characters in his forthcoming films, Rajpal tells us about his blind faith in a director trio, his past mistakes and what makes him so popular with the audience.

Q: Tell us about your character in "Dhol"?
A: I don't discuss about my character before the release of my film. Priyanji has provided me a suitable character. The only thing that I can tell you is that the character is completely different from my previous roles.

Q: How is "Dhol" different from your other comedies?
A: It's entertaining. The situational comedy will make people laugh. I believe the audience will like it. After all, it's a Priyadarshan movie.

Q: How was your experience of working with your co-actors?
A: It was a nice experience. Priyanji balances everything on the sets. I enjoyed working with Kunal, Tusshar, Sharman, Tanushree and Payal. The film depicts the story of four friends, and we all used to spend time on the sets like pals as well.

Q: Can you remember any comic situation during the shooting?
A: We used to have fun on the sets all the time. But I can't remember any particular incident right now.

Q: Don't you think that Rambha Bhai was too small a role in "Aag"?
A: I never ask Ramuji about his characters. I just ask him to tell me what to do. I don't even check the screen duration of that character. If a director makes a two-hour movie, it's his responsibility to take care of each character's screen duration. I have played different characters in almost all of his 15 films. So I have complete faith in him. He always keeps my potential in mind before sketching the character that befits me. He has given me films like "Main Madhuri Dixit Banna Chahti Hoon" and "Jungle". So, I believe whatever he'll decide will always be in my favour.

Q: You have also acted in serious films but people couldn't accept you in that genre. What's the reason?
A: Who told you that? Most of my characters this year are serious. Let them get released first, and let peo 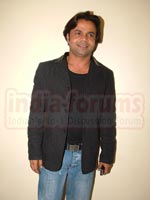 Featured Video
ple watch me on screen. I'm very happy with my characters. I don't believe in categorizing films. Each of my characters is a challenge to me. I just want to do good films. I don't have time to think of the class people wish to confine me in. You all think that I do comedy, but in reality, I have never done comedies. Be it "Hungama", "Jungle" or "Waqt", I never uttered a single comic line. I always play my role. It's good for me if my characters entertain people. It doesn't matter even if it's a serious one.

Q: It is learnt that besides acting, you also have penned the screenplay of "Main Meri Patni Aur Woh". Are you doing the same in any other film?
A: I didn't write the screenplay of the film, it was just my idea. Perhaps, now I should try writing. There are some such films but I don't want to discuss about them now.

Q: David Dhawan has chosen you again after "Partner"?
A: (Laughing) It's now like a family with Priyanji, David Dhawan and Ramuji. We like to work with each other. I worked in David Dhawan's "Mujhse Shaadi Karogi". I was the third hero in that film after Salman and Akshay. He knows my talent very well. And I feel fortunate working with him.

Q: Many actors today find favour either with the director or with the audience. But you are loved by both. What do you think about this?
A: I'm really thankful to you all for that. At the same time, it's all due to the blessings of my Guruji Pandit Devpravakar Shashtri. Some credits must be reserved for my hard work, too. I'm happy that I'm not an item actor. Your blessings have made me better and I'm solely responsible for whatever mistakes I have done.

Q: Have you ever chosen wrong films?
A: Yeah, several times. But I try to learn from my faults. A big mistake was choosing "Ladies Tailor". Actually I liked its story, but it was during the shooting that I realized my fault. If I knew what's going to happen, I would have never signed it. I'll try not to repeat the same blunder again.

Q: You are again playing a real-life character in "Kahani Gudiyo Ki". Tell us about that.
A: I don't want to talk about that film now.

Q: You are also going to lead some movies. Would you like to tell us about them?
A: The most important among them are "Rama Rama Kya Hai Drama?", "Hello Hum Lallan Bol Rahe Hain", "Masti Express", "Ho Jayegi Balle Balle", "Banti Ka Mama" and "Mister Khujli". It's too early to talk about these movies. When the time comes, I'll tell you all.

Q: Please tell us about your other forthcoming films?
A: There are films like "Vivash", "Wednesday", "Go", "Forgotten", "Sobers", "Phauj Me Mauj", "Benaam" and "Ek Se Bure Do". Besides, there are N. Chandra's "Breaking News", Rakesh Roshan's "Crazy 4", Priyadarshan's "Bhul Bhulaiya", Ravi Kopda's "Pappu Paas Ho Gaya" and "Bhutnaath". I guess "Pappu Paas Ho Gaya" will get a title change. At the same time, there is "Chal Chala Chal" with Govinda. I really enjoyed working with him. I have even acted in Bhatiyaji's production "Kafan", which is directed by Vinodji and based on Munshi Premchand's story of the same name. It's has been specially made for film fests. As a former student of an acting institution, I think it's my duty to act in such films.