Ekta Kapoor's Kahaani Humaarey Mahaabhaarat Ki on 9X finally has the elder Pandavas and Kauravas being revealed to the audience very soon.

Telly Buzz caught up with the audiences’ heart throb, Hiten Tejwani, who plays Karan, the eldest son of Kunti. 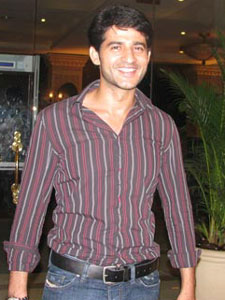 Featured Video
The show has not really picked up till now. Any specific reason for that?
It's too early to say anything right now. We have just telecasted 42 episodes, so need to wait and watch. The real Mahabharat begins now. Having said that, I do accept that things have not shaped out the way we hoped they would, but as an actor all I can do is give it my best shot. The rest is up to the audience.

So do you expect the ratings of the show to go up with you all entering as the grown-up Pandavas and Kauravas?
We sure hope so, but then again, the audience is quite funny. You never really know what clicks when with them.

You people have received a lot of negative publicity owing to the attire worn in the show.
(Laughs) You know sometimes bad publicity is good publicity. Seriously though, people still have B.R. Chopra's old Mahabharat imprinted on their minds, but Manish Malhotra has given this Mahabharat a whole different perspective. And if you know Ekta, she has always done things on a grand scale, be it the costumes or even the huge sets.

What about your make-up. Is it a strenuous job to apply it?
Oh man! It is actually a pain. It takes me almost an hour to apply the bronzer. I never applied make-up for any of my previous shows. I just dressed up in the given costumes and went for shoot.

How is it playing a different and interesting character like Karan?
It's great. Karan plays a very pivotal role as the story unfolds. I feel this is the right time for me to experiment with something new and what better way to do it than with one of India's greatest epics.

Did you do any homework about the character before the shoot?
No, I am a director's actor. I do my bit and go home. But yes, I have heard that there will be some serious training before the major battle scenes are shot.

What's happening on the Kyunki front?
Well, as of now the creatives have reduced Nandini's and my track. I personally feel this is a good thing as it makes the audience eager to know when we will be in full gear again.

But the TRPs have been dwindling in the last couple of years.
Well obviously, the show has been running for the last eight years and some level of saturation is expected after such a long duration of time.

Most of the actors today are working towards building 6 pack abs. What about you?
I have begun with 2 packs and the rest will follow pretty soon.

So any fear of being compared to Pankaj Dheer, Karan of the earlier Mahabharat..
Not at all!! See the thing about me is that I am a pretty cool guy and don't believe in taking unnecessary tension. Even when Karan's character began in Kyunki, it was not iconic, but see where it is today.

If not Karan which other Mahabharat character would you have played?
Arjun.

Gauri's take on your new look?
She is quite happy with it…

13 years ago i loved him in kutumb and even gauri!!! i hpe ekta makes kutumb kinda serial with guari and karan in leading roles

maruyam 14 years ago Goodluck to Hiten:)
Hiten id deffo better looking than srk or salman!!there's no doubt abt it...he is one of my Fav