The ugly duckling turned swan, Mona Singh aka Jassi is our latest make over guru with Sony’s new show, Naya Roop, Nayi Zindagi. In a candid chat with Telly Buzz reporter, Binita Ramchandani, Mona shares some of her secrets and tells us what a glam doll she was before she became famous as Jassi. 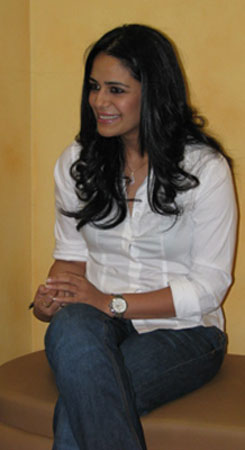 Featured Video
Let’s start off with a brief about your new show.
The show is about making things right for people who suffer from various physical deformities that mar their beauty. People with broken jaws, clipped lips, twisted noses and other such grave issues. The contestants are given a makeover by a panel of doctors. Since it took about 4-5 weeks for every patient to recover from the surgery and they are all complicated surgeries, we had to shoot the entire serial and then go on air.

How is Naya Roop Nayi Zindagi different from other reality shows?
Television shows seem to be getting quite monotonous and I think it I think its high time that the trend should change for instance when Jassi started, a lot of similar of shows started. With KBC, channels came up with various quiz shows and now the trend of reality shows. Everything happening on television is the same; there is no difference. So, it’s high time that something different be made. When I am asked about this show, all I can say is that this show is not a competition; it has no winner or loser. It is just about an extreme makeover. Over and above, such a concept has never been broached on Indian television.

What is your idea of beauty?
People say beauty is skin deep, even I feel the same but I think in first impression is everything, and finally it’s not the make up but the kind of person you are.

So did you always like to be all dolled up and be in the limelight or were you shy as a kid?
Honestly, before doing Jassi, I was a ramp model. I had to visit the parlour twice a week. When offered the role of Jassi, I was completely stunned. I wondered why I was chosen for this role. Immediately the first question that came to my head was ‘am I this bad looking?’ However, later they told me there would be a makeover in the show, so I was eased out. I was a complete fashion chick right from the time I was in school and people tried a lot to copy my style.

Karan Oberoi has come up with a new show Hadsaa, what do think about that?
I am very happy for him and hope it does well. In fact, when they were shooting for the show, they offered me a cameo in the serial and let’s see we are still talking about that. I will be happy to work for him but I would definitely charge him a bomb! (laughs).

You have maintained yourself well. Any particular secret to control cravings?
Well, sometimes when I see something that really makes my mouth water and I just want to eat, I control myself by repeating in my head, ‘it is poisonous and is completely covered with fungus.’ After many repetitions, I feel repulsed to look at the dish and succeed in controlling my craving. (Everyone had a good laugh).

14 years ago I loved her answers,especially about TV shows following the current trends. Really want her to come back in a new show, this time acting and not hosting!

14 years ago Wonderful interview.... I knew there was a good reason I loved her!!!

all the very best to my dear jassi