View Profile
Punit Malhotra, the I Hate Luv Storys director, is now ready to set his good looks in front of the camera rather than behind. Or is he? 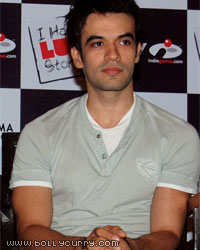 If buzz is to be believed, Punit has been finalized to play the lead role in Adeeb Rais' maiden Bollywood flick, Main aur Mr. Riight. Speculations revolving around the lead heroine, wherein a few assumed it would be none other than Punit's good friend - who seems to be more than just that - Sonam Kapoor, while others opted for either Deepika, Anushka or Shraddha Kapoor.
However, it now seems that all three hot-shot girls have declined Rais' continuous offers. Reason? Apparently, with the numerous numbers of potentially hazardous rumors of link-ups between co-stars, the three ladies were wary of crossing those dangerous waters with Sonam.
Furthermore, it comes as a shock when the debutante himself remains oblivious to any such film being made into action.
In an interview with a leading tabloid, Punit denied any such venture, stating that he did not have a clue about the project whatsoever. In fact, he even went as far as denying any meetings taking place between the producers in the first place.
Tinsel town and its rumor mills! What can one say about them? Only time will tell what fate awaits this venture!

Paurashpur actress Ashmita Bakshi feels an actor should act, one ...