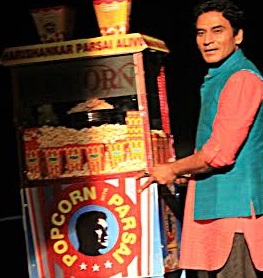 It is always entertaining to watch an actor enacting a particular character, but what if an actor plays multiple characters at a time? Isn't it marvelous?
Yes, this talented actor, Daya Shanker Pandey, who has acted in shows like Taarak Mehta Ka Ooltah Chashmah, Shanidev and also seen in some of the acclaimed films Lagaan, Swades, Gangajal, is acting in the play titled as 'Popcorn with Parsai'.

While, Daya has finely, experimented with the various mediums, he will be seen on the stage playing 29 characters in the play.
Telling us about the play, he says, "This play is based on the popular Hindi writer and satirist Harishankar Parsai. I have read many of  his write-ups  and I feel proud to enact his work. Its always beneficial for an actor to do such things because the freedom and satisfaction you get while doing a play or theater cannot be compared with any other thing. The feedback and review from the audience is also instant."
He further adds, "I got a standing ovation for my performance. I have done rigorous rehearsals for giving my performance. Now again, I will be performing in Kala Ghoda festival. According to me, people who like literature and who are somewhere connected to it, should watch this show. It really opens up your mind."

We wish Daya all the best for his play!