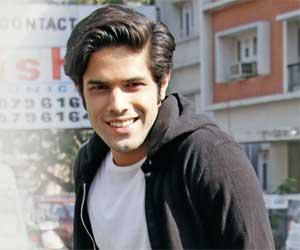 You have seen your favorite stars acting with perfection on-screen but do you know how much hurdles they have to cross to bag a role? They have to go through various auditions to get a role. We all cherish the memories related to our first day's experience of anything. Similarly an actor always cherishes his/her memories related to their first audition.

We quizzed actor Mrinal Dutt who is playing Raffe in P.I Private Investigator on Star Plus and asked him about his first audition and memories associated with it.


Sounding excited Mrinal shares, "The first audition I gave was during my college in Delhi. I auditioned for a play in my college and I gave it very well and was also selected for the play. I have given 100 of auditions, when I was in Delhi, I started doing advertisements. Then I came to Mumbai and started giving auditions. Again in Mumbai I gave many auditions and I was selected for many commercial ads. I gave auditions for very selective TV shows. I don't remember that I gave my first audition for which show but I remember my first audition was for a commercial. It was for Pizza Hut and I got selected for it."

"The first TV show for which I was selected was Channel V's Sitcom comprising of 26 episodes. That time I thought this is the best show that has happened to me. Later when I was in Delhi, I got a call that they want me to play the character of a detective as they are making a series on private investigator.

I came to Mumbai, heard the concept and thought it's quite interesting and even I was looking for a good role. The makers did not take my audition for the role as they liked my previous work. Later when the channel wanted to take my audition, that time I gave an audition for P.I that to at my home," he concludes.

6 years ago You are a very talented actor. You live and breathe as Raffe when on screen.

6 years ago I am glad the Indian version of Detective Conan or Case closed (A Japanese Manga and also TV series) is doing well. Though the detective serious is almost the same, the plot is different in the manga.
Love em both..!!

+ 3
6 years ago Loving Mrinal as Raffe. Private Investigator is an interesting & refreshing show. Good luck to you & the whole team :)

+ 2
6 years ago You're amazing as Raffe Mrunal Dutt! One of the best shows I've come across lately, everything about the show is well crafted and thought out, especially the characters.