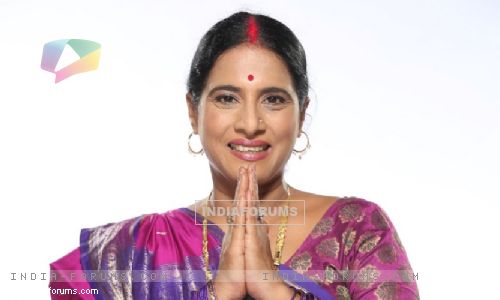 Popular actress Shubhangi Gokhale who has shown her exemplary skills in many TV shows was recently seen in SAB TV's LapataGanj, is now essaying the character of a strict and orthodox mother- in- law in Hum Hai Na, speaks to us about her experience in Lapataganj, what made to act and more...

Ask Shubhangi about her start for the career and she says, "My roots are from Marathi theater as I started my career with it. Later I started doing Marathi shows and then gradually I started doing Hindi shows."
Sharing her experience of  doing LapataGanj she says, "I always remember the moments I have spent  in LapataGanj. My experience of working with LapataGanj is remarkable. I think the roots as well the concept of the show is very finite and the makers have always maintained the concept very well. The directors and writers always knew what they have to portray in front of  the audience and they were successful in doing it so which was the  USP of the show. Honestly speaking I enjoyed the character of Mausi in LapataGanj and now enjoying Ammaji's in Hum Hai Na which is not so defined."
Talking about the transition which she has seen from LapataGanj to Hum Hai Na, Shubhangi avers, "I enjoy doing different shades of characters. LapataGanj was out an out comedy and my character was very defined whereas in Hum Hai Na my character is not so defined. But yes I enjoy doing both shows."

What does Shubhangi has to say when it comes to the show's TRPs and to boost up, the storyline sees a transition? She says,  "You may not believe it but I really don't understand the system of TRPs. I am an actor and just believe in doing my work efficiently. I did a famous Marathi show where Dilip Prabhawalkar, Ek Lagnachi Teesri Goshti played the lead role which is still remembered by people a few time months back but someone told me that the show had highest TRPs during that time which I never knew."

6 years ago Sbubhangi Gokhale is an amazing actress with a wide range of expressions, especially love her comic timing!

+ 3
6 years ago Shubhangi Gokhale is a stupendous actor!

6 years ago No doubt Shubhangi Gokhale is excellent and versatile actress. We love you Ammaji at the same time hate to love when you are wrong.

+ 3
6 years ago Shubhangi Gokhale is a brilliant actress... and her comedic skills were on full display yesterday!

6 years ago Shubhangi Gokhale, you are wonderful as the bad Amma, we love to hate you but please become a benevolent and inspirational MIL, real life imitates reel life, so please inspire others to be good MILS. But you are an awesome actress, kudos to you!