Keeping up his swipes at superstar Shah Rukh Khan and the No.1 slot in Bollywood, Aamir Khan, riding on the super success of his revenge drama 'Ghajini', has said he never thought Shah Rukh was ever on the top pedestal at all. 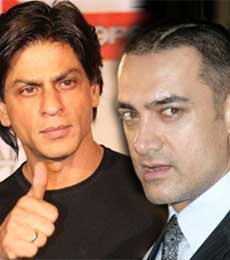 
Aamir, during CNN's special edition of 'Talk Asia', was asked how he feels about being termed the new 'King Khan' after the success of 'Ghajini'. He replied: 'I had absolutely no intention of kicking Shah Rukh off his pedestal. Though I have to say, I don't think he ever was on it.'


Elaborating, Aamir said: 'In my opinion, the actor who I really look up to is Mr. Amitabh Bachchan. He is someone whose work I really like, a fantastic actor and the kind of stardom Mr. Bachchan has seen, none of us can ever hope to see.'


The 44-year-old actor, whose latest work, the Hindi remake of Tamil film 'Ghajini', was a success at the box office, says he feels satisfied with his films only if they turn out to be as they are intended.


'You can never really tell until you see a film with the audience. How it is going to play with the audience. For me, what is important is that when I see the film once it is ready, has it turned out the way we wanted it to? If we have done that, then that makes me feel happy,' he said.


Aamir, whose own directorial debut film 'Taare Zameen Par', failed to get nominated in the foreign film category at the 81st Annual Academy Awards this year, says that 'Slumdog Millionaire' failed to 'touch' him.


'I thought the movie was well intended. It was a very sincere attempt, but it didn't touch me personally, and I suspect it because I'm not used to watching Indians speak English, all these slum kids talking in English... it's strange,' said Aamir.