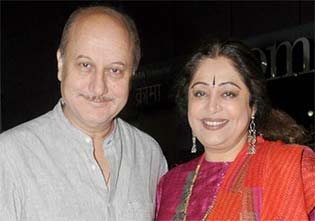 Veteran actor Anupam Kher, whose wife Kirron Kher won the Chandigarh Lok Sabha seat on a BJP ticket this year, says that she is so dedicated to people of the city that she doesn't get time to even meet him.

Kirron had joined the Bharatiya Janata Party (BJP) in 2009 and was fielded from the Chandigarh Lok Sabha seat in 2014 general elections.

"I used to meet her sometimes before that now I don't get to meet her...which is good and not very good also. I don't get to see her because she is now in Chandigarh and Delhi and even when she is in Mumbai, she is sorting out Chandigarh peoples' lives. She is an actor and an actor's wife, she gets calls for Salman Khan's number also," Anupam told reporters here.

The actor, who supported his wife during the poll campaign too, says she feels she needs to do "concrete work".

"She is not very (active on social media). She will want her people to handle all that because she feels that she needs to do concrete work and she has to deal with not through social media. She has to go on the field and do it," he said.

Asked if he would also join politics, he said: "I've never said no but for next 10 years I don't think I'll be interested. But you never know."

Politics can wait for now as he is busy with film projects and his new celebrity chat show "The Anupam Kher Show - Kucch Bhi Ho Sakta Hai".

He is okay with comparisons, even if it means being compared to his wife, who is also currently narrating a show titled "Kitni Girhain Baaki Hain".

"I've not yet (watched the show). I've heard people appreciating her work on the show. Comparisons should happen. It's healthy. It makes me do my job in a better manner. But her show is different. She is narrating stories that are already there. This (...Kucch Bhi Ho Sakta

Hai) is conversation with people I admire and I love,' he said.

The 12-episode show that will start July 6 on Colors, will have guests like Shah Rukh Khan, Akshay Kumar, Alia Bhatt, Parineeti Chopra and Sonam Kapoor.