Naitik aka Karan Mehra, the new lad on small screen is making waves with his stint in Star Plus' Yeh Rishta Kya Kehlata Hai, produced by Rajan Shahi's Directors Kut. The handsome lad from Delhi is not new to the industry though, and has the experience of working behind the camera. 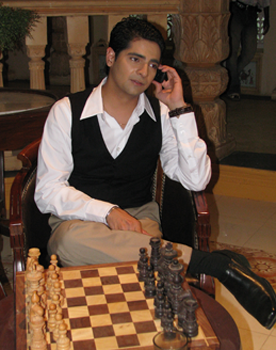 "I have assisted few producers behind the camera. Then I have also worked as an assistant stylist for a production house, but then shifted my base to ramp modeling. Now I have grabbed this role in the show," says Karan.

Karan has done ads for 7Up, Hotspot Mobile store, HT etc. "I always wanted to be seen on camera, but before that my aim was to get an understanding of how things roll behind it. Today because of that I am very much comfortable in front of the screen," he adds.

"As an artist you may come, say your line and go away, but the work behind the camera is not at all easy. I don't say that it's easier as an actor, but just want to emphasize that things are very difficult behind the scene. The work done by all, from the technicians, to the camera man, to directors and spot boys are amazing. Today this knowledge has given me much confidence and encouragement," he quips.

He has done his acting course from Kishore Namit Kapoor Institute. "It was a four months course and it has helped me open my eyes to a wider range of observation. Though I felt the heat while facing the camera, my previous experience helped me a lot", says the actor.

Talking about his experience while auditioning for Yeh Rishta… the actor explains, "There were so many young guys who came to audition for this particular role of Naitik, but I was the lucky one as I got a call on the second day from Rajanji's office. When I went there, they explained me in details the character of Naitik and it charmed me a lot", explains Karan.

"We even got through the look test and things were finalized soon. The role also appealed to me and it felt great to be working with such a good production house. This is how I landed on the sets of Yeh Rishta Kya Kehlata Hai. I am all content and happy with this show in my kitty," he states.

Elaborating on his character, Karan verbalizes, "Naitik is a quite a women's man who is pampered by everyone in the house, from mother to sister and everybody. Due to this he is little spoilt but at the same time he is aware of his responsibilities and duties towards the family. His head is always on his shoulders and it's quite a sweet character."

archana04 11 years ago Wow. Thanks for his interview. He is so cute. But a little spoil in Yeh rishta. But that''s ok, boys are like this only. Yeh rishta rocks like BIDAAI. Luv Kinshuk and Bidaai

sanw 11 years ago he forgot to say, he was a dominating person too!!!!!
very arrogant

dhoopkinarey 11 years ago I wonder how his girlfriend feels about his belief in arranged marriages...lol

.Senorita. 11 years ago He is so cute!
I also believe in arrange marrages!
Thnxx for sharing!