Bollywood actress Katrina Kaif is so impressed with 'Twilight' star Robert Pattinson that she can't stop thinking about him. And if all goes well, she'll be meeting him during her annual holiday with her family in London. 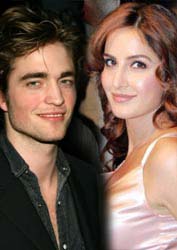 Featured Video
don't understand. This is like an obsession for me. I can't get Robert Pattinson out of my head...I've never felt this way about any man before,' Katrina, who has given hits like 'Ajab Prem Ki Ghazab Kahani' and 'De Dana Dan' this year, told IANS.

'I went and bought all the four books - 'Twilight', 'New Moon', 'Eclipse' and 'Breaking Dawn'. I couldn't put them down. I've been racing through the adventures of the hottest vampire Edward Cullen for the last one week. I finished reading three of the 'Twilight' books in less than four days. Now I'm into the fourth. I just can't get enough of him,' she said.

The actress now plans to meet Pattinson, who plays Edward Cullen in the 'Twilight' series. Her representatives are in touch with the latest Hollywood heartthrob.

'Obviously I can't stand under his window to get his attention. So yes, the meeting has to be more formal. He says he's single, but I don't believe him. That's what they all say,' she said.