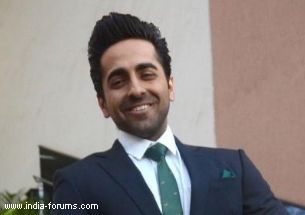 Ayushmann Khurrana, who made a fruitful debut with "Vicky Donor" and is now looking forward to "Bewakoofiyaan", says he sees no "competitor" in the Hindi film industry. He further believes that he has a major plus point in the fact that he can act as well as sing.

Bollywood currently has a whole lot of young blood, and when asked who does he consider as a competitor from among the likes of Ranbir Kapoor and Ranveer Singh, Ayushmann said: "There is no competitor as such. I think my biggest plus point is that I am an actor and singer as well."

"As far as Ranbir Kapoor is concerned, he is my senior and I like his work," added the multi-faceted talent, who was earlier a video jockey.

The actor who got married at a very early age says he is happy about that.

In "Bewakoofiyaan", Ayushmann features with Sonam Kapoor and Rishi Kapoor.

The senior Kapoor's presence in a movie can be unnerving for some, but Ayushmann is not a wee bit nervous about being overshadowed.

"I have huge respect for Rishi Kapoor. He is playing a prominent role in the film, but I don't think I will get overshadowed because at the end of the day, Sonam and I are playing the heroine and hero, respectively, in the film," he said.

Aditya Chopra Pens a Heartfelt Note on '50 years of Yash Raj ...
51 minutes ago