Anvesha from Remix and Misha from Pyaar Kii Ye Ek Kahaani can be called as the two cool dudes of Star One who have successfully captured the hearts of the viewers.

But Priya Wal who had been Anvesha and is now Misha, is not exactly like what we see her on screen. And did you know that she has completed a script to make a feature film?

In a candid conversation with Tellybuzz, Priya Wal tells us about her as an actor and how she is interested in the creative aspects of the industry. 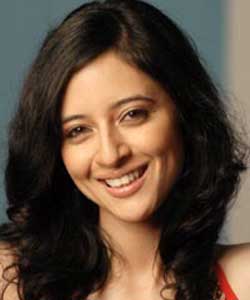 Can you please tell us how Priya Wal is?
Kids who used to watch Remix know me well, I have had an unconventional childhood. I was like a gypsy out of school, grew up in a boarding school in Ajmer. After that I joined the Tennis Academy in Gujarat. When we got shifted to Delhi, I started modeling and it's been six years in Mumbai now.

How do you feel to be back in Star One again?
Actually Star One and Remix took off at the same time and the channel had just been launched when the show had started. So we had been the face of the channel. After Anvesha, now it's Misha in Star One.

Misha is quite similar to Anvesha in Remix; how can we differentiate?
Both the characters are a lot similar and they are really great in their work. But at the same time Anvesha was one of the protagonists of the show and the show was about her and her friends. But Pyaar Kii Ye Ek Kahaani is the story of Piya and the people who she meets and comes across. And also there are individual stories attached to each character. Anvesha was a relaxed character where as Misha is very loud and anxious.

You had been away from the industry for quite some time; how did you keep yourself engaged?
After Remix, I did cameo roles in nearly eight shows. Then I played an interesting character in Kahaani Ghar Ghar Ki for eight months. After this, I was a little engaged with theatre as well and Ekta got in touch with me during those days and I said yes for the role. Initially I was a little apprehensive about taking up the role, but there were several reasons as to why I finally chose to do this. I was actually in a dilemma about what to do, but was sure that I had to enter into Television. I was looking for some extremely good work and today I am having a blast being in the show because I love the character, my co-stars and the whole ambiance of the show.

The show includes a lot of cast and crew that are young and are full of energy; how is it working with them?
Its awesome fun shooting with the whole crew and we are crazier off screen than on camera. It's a pleasant environment touch wood, and I am having a great time shooting with all my costars. And today when I go out, kids call me Misha instead of Ashi and they address the show as Bhoot wala show.

Who do you relate yourself most to?
Honestly, I become the character that I am playing and I am a little bit myself in my acting. But at the same time I am not completely Anvesha or Misha because I am very much a girl and I do not like the expression 'Tomboyish'.

Who are your best friends on the sets?
I am really fond of everyone on the sets and I am more close to T, Tracker and Piya.

How has been the journey so far in the industry?
The journey has been great and I know it has been long, I think around six years, that we had done Remix. But whenever I did shows, I never felt that break because I have always wanted it that way. I do only one show at a time and do not do like lot of exposure. After Remix and Kahaani Ghar Ghar Ki, its Pyaar Ki that I am doing at a long stretch. Otherwise, I used to do only cameos in shows. I make it a point to devote some refreshing and sanity time for myself after work.

You have been in the industry for a long time; what are the changes that you felt in the journey?
I really do not know, because whatever set I am in, that becomes my family and that's what my relation is.

You have also been doing short films as well, now that you are engaged with the show have they been sidelined?
Actually, I had made a short film with my costars of Remix because I was always interested in the creative side of the industry. Even when I was doing Remix, I used to get involved in the creative side of it. And now I have completed a script for a feature film and after this show, I am planning to take it to the floors.

When you take up shows, what is the first thing that has to click your mind?
It's just the character that should catch my mind and if I am able to relate myself with the show and the character, then I would give it a nod. It does not matter if it is the main lead or the parallel lead, I tell the same thing when people approach me with scripts.
What would be your further  be like in the show?
Even I am looking forward to it, and now that Misha is in love with a gay man, there are more funnier things to happen in the coming episodes.

maryrose 9 years ago love u priya.misha always make me smile.

maryrose 9 years ago love u misha.so are going to pretend as shankar's wife for shaurya.it reminds me of shyla devi in remix.

maryrose 9 years ago love u priya.nice interview.i love misha.i am watching pkyek only to see u.i want EK to give a strong track to u.a great actress of ur calibre is now treating only as a comic filler.but u deserve more screen space and good story.thanks for giving this interview and give as more often.

-Preeti- 9 years ago She's just the best in the show. I wish to see her more often in the show

AshiYuvi4life 9 years ago Loved Priya as Ashi back in 05, love her now as Misha! &lt;3