Star One and Balaji Telefims' Pyaar Kii Ye Ek Kahaani saw one of the most handsome vampire entry recently. The amorous boss of Panchi (Vahbbiz Dorabjee), Siddharth Mehra, has indeed captured the hearts of a million girls.

The onscreen vampire celebrates his birthday today and Telly Buzz thought that there couldn't possibly be a better day to know the actor more.

In a candid chat with Telly Buzz, Siddhant Karnick speaks about his experience as a vampire in the show and the change in the reaction of viewers after he took up the role as a vampire!!! 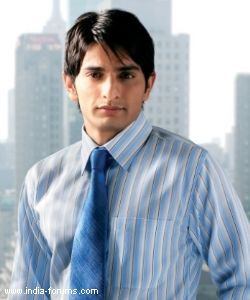 How do you feel doing a show with Balaji?
I feel really good doing a show with Balaji because honestly, I did not have this in mind and the experience that I have been getting has gone beyond my expectations. We have a fantastic director, a young team of actors and of course, Ekta, who is there at the helm of the show. We are efficiently shooting without any complaints.

Which of the characters you played is closer to you? Ishaan or Siddharth?
I bring something of me into the character whenever I play a role. For instance, Siddharth is funny and witty and has a sense of humour similar to mine. Ishaan from Mahi Way  had a great body just like mine (smiles).

What are the challenges that you faced while portraying the character of a vampire?
There hasn't been much of a difficulty in portraying the character of a vampire. I have been allowed to experiment with the role by a huge team which is completely supportive. It has always been fun to discover new stuffs and since I am doing Comedy, I am allowed to try out my inputs in the show.

How is your rapport with your co-actors?
I have an excellent rapport with my co-stars and I just couldn't have asked for more. I have fantastic co-actors who are fun to be around with; we can get wacky at times as well when all are off after work. I have a great rapport with Vahbbiz and since we have most of the scenes together, we get along really well. Also, I do have a great interaction with Vivian  Dsena as well as we often help each other out. We give suggestions to each other on our performances because our ultimate aim is to make the scene better.

How can we see your track proceeding further in the show?
Now I am the referee between Abhay and Piya and people are going to see a lot more of the darker and deeper side of Siddharth. Even though the show was about vampires, till date there hasn't been any solid scene shown on the vampires. But henceforth there will be more of graphics with vamps in action.

How do you differentiate the character from Ishaan in Mahi Way as he too was a playboy?
There are  indeed similarities in both the characters where both are sophisticated and girls are a common factor for them. But there are certain vampire traits in Siddharth which are meant only to him whereas Ishaan was mainly a fantasy oriented person. There is also a difference in the looks of both the characters as well.

You have also done a cameo in Kismat as well; how was it?
It was great to do the role of Madhav and I feel that I am really fortunate that I am being offered different roles rather than being stereotyped as one. The only mutual aspect about the roles that I have done till now is the rich background they bear.

Was it difficult for you to transport yourself from Ishaan and Madhav to Siddharth?
I will proudly say that there has not been any difficulty in shifting myself between the characters and I am happy that I am offered such conventional roles. All three of them are different people with new entities except for the fact that all are rich.

Are you disappointed that you are not doing a YRF show after Mahi Way?
I was disappointed not because a show was not offered to me, but because there was no role for me. I had a fantastic time with team YRF and I am looking forward to do more shows with them in future.

Mahi Way is set to make a comeback with season two; would you be interested in the show if approached?
Absolutely, because the show is really close to my heart.

How were you engaged after Mahi Way?
I was busy travelling on my bike to different locations and I feel that travelling gives you the best education. I have also enrolled myself in Improv Comedy where we improvise our comic skills by taking suggestions from the audience on the act that we do live after the performance. I have also given voice-over for movies and cartoons as well and in addition to that, I have also been a dance instructor for Salsa.

How is Siddhant Karnick in real?
Siddhant is a very boring person evident from the fact that he doesn't socialize much and is not much into clubbing and partying. He likes staying at home catching up with his favourite books. The adventurous side of Siddhant likes to travel on his bike to long distances like Kashmir, Coorg etc.

Any memorable fan interaction you remember after being a vampire?
Actually nowadays all are scared I guess, to even come near me because, when I was playing Ishann, people used to come to me and ask for autographs and pictures. But today I can see them running away from me.

Can you share something about your upbringing?
My father is in the army and hence, before I came to Mumbai, I had changed eight schools in seven years, thus becoming really adaptable. I started modeling during my college days and never in my wildest dreams had I thought about acting. That was a smooth transition that came around me.

What do you enjoy most? Modelling or acting?
I enjoy all that I am doing and hence I can really say that I am not really working.

It is your birthday today; what would you like to share?
Actually my mother was supposed to throw me a 'surprise birthday party' but my dear friend Priya (Priya Wal) who is helping my mother, accidentally texted me instead of my mother. But I being an actor staged another act pretending that I didn't even know about it.

What is your message for your India-Forums fans?
India-Forums is a fantastic platform for us wherein we get constructive criticisms with which we can also improve ourselves. Also, I would like to say that I am not in the show to replace anyone and we all are great friends here on the sets. This is an already set show where I am an addition to it. I am like the Parsis who came to India, to add sugar in the milk.

9 years ago hellow mr atracttive evelniss. like ur sense of humor

Naz_an 9 years ago i like ur acting... nd role.. ur charate is is quite intresting...

9 years ago sid!!! u were sooo damnnn good in todays episode!! u and panchhi rock together man!!! ur the most amazing character in pkyek possibly!!

11simonee 9 years ago I feel sid is much more like vampire than abhay he even look good with that long scary vam tooth.... so you are doing very good so far and you also have v good sense of humor ,,,, keep up the hard work.... love you