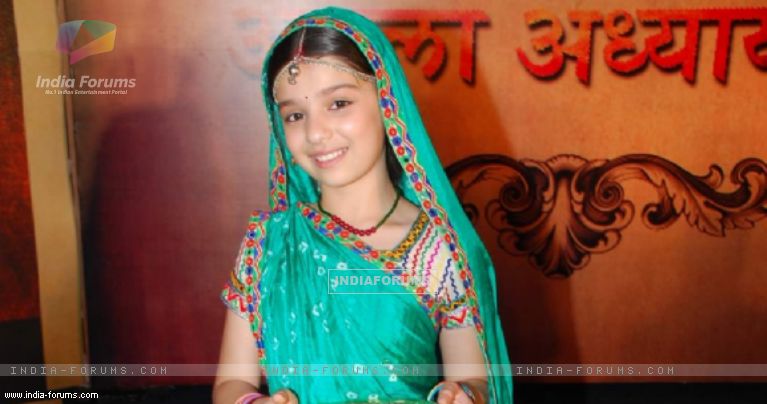 Post the 11 year leap in the Colors' Balika Vadhu (Sphere Origins), the show has gone through a lot changes and has been trying to keep the audience gripped like always. Viewers have already witnessed the leap and how has Anandi (Toral Rasputra) parted ways with her three month old daughter Nimboli (Gracy Goswami).

In this chat with TellyBuzz, Gracy speaks about her character, bonding with actors and much more.

Gracy has been watching Balika Vadhu since quite some time now and getting familiar with much of the things of the show. She says, "I have been watching Balika Vadhu since last two years. I have tried to adapt things like Avika Gor (young Anandi) innocence, the way she used to act and the way she connected with the masses, I am inspired by her. Looking at her, I am trying to connect to the masses in the similar way. Kundan (Sparsh Shrivastav) and I have shot only a few days but still we have become good friends."

Talking about her character on the show and how Gracy is related to Nimboli, she says, "I am playing a very bubbly, mischievous role who finds happiness in small things of life. But yes, I am very much similar to Nimboli in many ways like I am mischievous, she is 11 yrs old and I too am 11 yrs old. I am always happy just like my character."

When asked about her bond with senior actors and her Rajasthani accent, she answers, "Toral didi is very sweet, cute and has done complete justice to her character. I really like her. Besides her, I have learned a lot from Rajeshwari Sachdev ji also as to how to deliver each dialogue and how should I present myself in front of the camera. Initially, the script is written in Hindi which is translated in Rajasthani and that is how I am getting this typical accent."

This young Gracy can surely be called as a bunch of talent!

6 years ago Looking forward to see how Anandi is going to reunite with her daughter.
Toral Rasputra , all the best!!

6 years ago You are a wonderful Anandi, so graceful and dignified, Toral Rasputra

ar_ooj 6 years ago Toral Rasputra is the best Anandi in the world love you, keep rocking

Mila-Nn 6 years ago Keep the great work up Toral Rasputra you are awesome, brilliant as Anandi

Reham741 6 years ago You are brilliant as Anandi, Toral Rasputra

6 years ago Toral Rasputra you're fantastic, but I really can not connect with Nandini