Mita Vashist is happy to be back as the over-the-top Trishna in Star Plus' Kahaani Ghar Ghar Ki. “The rains are back in Mumbai and so is Trishna as a toofan”. She refused to talk about her future track saying that is for you to find out. “All I can I say is that she will unleash lots of fire works”, the actress quips. 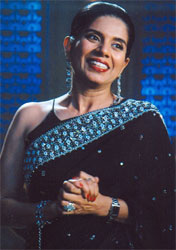 Featured Video
She goes on “It had been a year since my track was not around and the channel also was getting feedback requesting Trishna’s comeback. “Hence here I am”, says she. So will there be any changes in your look since you will be out of jail now? “No ways I will still look good and the same dark red lipstick will continue”, avers Mita.

She did admit that Balaji does give a whole new fantasy element to reality. “You have characters dying and resurfacing with plastic surgery. And even the surgical intervention gets undone. But that's the fun and people love it”, chides Mita.

Mita who had done several characters on TV before says that in terms of popularity nothing beats Trishna. She is negative in deed, but never vulgar.

She is also happy for the fact that the audiences recognize the difference between Mita and Trishna. “They never attack me personally for the antics I do in the serial as they know that I am doing just one more character”, states the actress with contentment. On the filmy front Mita has three more projects lined up for release.

14 years ago wow good to see her back again and thank u.

+ 4
14 years ago Im so happy she's back! She's one of the best villains on BT, I love her! Haha, now hopefully Adi-Mets will be back, and KGGK will rock the charts!

+ 2
14 years ago trsihna is a funny villain. thx god she is bck.. i hope same way madi will b also bck