View Profile
Aishwarya Majmudar, finalist of Voice of India Chhote Ustaad, captured the hearts of millions thourgh her soulful renditions. Here is the little star in conversation with our Telly Buzz reporter, Melanie. 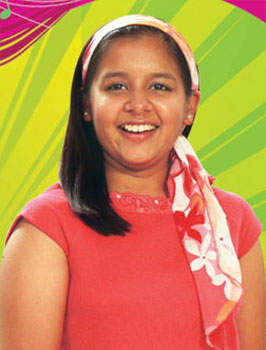 Featured Video
How has your journey been thru Chhote Ustaad?
The whole journey is very good. I learnt a lot of things being on Chhote Ustaad, things like how to present yourselves in front of an audience, how to react to the comments of the judges, perform on stage etc. i have also experienced a lot of things for the first time,and we travelled to different cities to perform so we learnt a lot about different cultures and people. Being on the show we got a lot of exposure and met different celebrities also.

How are the preparations coming along for the finals?
Preparations are going great. We are all working very hard. We are not only working on our songs but also a bit of the choreography because we will be performing for the finals. I will give my best so that the show is rocking.

Among the three judges who is your favorite?
All the judges are good. I like each judge for his/her distinct quality. Each judge is different in their own way. Like for instance Pritamda is very helpful and is always there to guide us and help us when we go wrong. Shreya gives good comments and appreciates our performances. And its the same with Kunal also.

In the usual format of such shows except for the finals all the rounds are done in the studio. How do you feel going thru this changed format? which format do you feel is better?
I have done a lot of performances in front of a live audience, so it doesn't really matter to me. I am quite confident about my performance either way. I prefer both as for movies we are expected to record in a studio whereas for stage performances, we perform live.

Who among you two have the best chance to win?
I haven't really thought about it actually. i would say that both of us are on par in the competition. At times Anwesha give us a mind blowing performance, while there are times when I perform better.

Any incident that touched you and you would be taking with you after the show gets over?
Each and every moment i have spent on the sets of Chhote Ustaad, is a moment i will cherish for the rest of life. It doesn't matter if it has made me happy or sad.

Future plans after this show?
I want to be a successful playback singer.

+ 3
14 years ago Thanks..she's an awesum singer..!!but is she majumdar(which is common gujju surname) or Majmudar(as she said in last episode?..)

14 years ago She is NOT Majumdar...she is MAJMUDAR...she clearly says tht in the last episode..

+ 3
14 years ago Go Princess... - You will surely top it... You ar ea perfect blend of confidence,talent, expressions,and have the sweetest voice to top it... definitely the tops... Best of luck....

+ 2
14 years ago Best of luck for Final.Aishwariya you are the best.we are sure you will win.

+ 2
14 years ago You are the champion and will be the Chhoti Ustadni. God bless you. You will be crowned. Best of luck for the next two shows Kolkata and Abad.