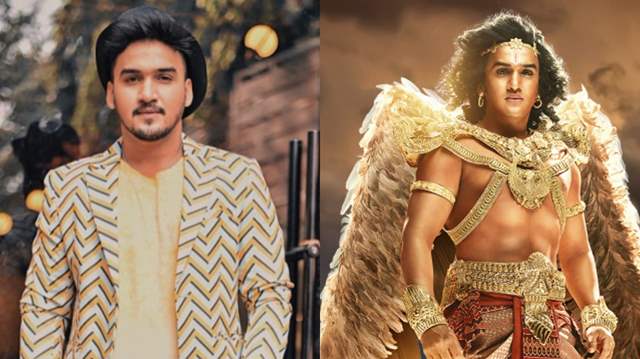 In an untold yet immortalized tale of a son’s affection for his mother, Sony SAB brings to you the story of the mighty king of birds, Garud (Faisal Khan) who exhibited extreme courage and grit to free his mother Vinta (Toral Rasputra) from the shackles of subjugation. Rishi Kashyap, the progenitor of all beings, was married to sisters Vinta and Kadru. While Vinta was calm, composed and learned, Kadru was the overbearing, evil sister who tricked the former into losing a bet leading Vinta to become a slave and fulfill her evil demands. As a result, Garud who was destined to be the Lord of the Skies, was born into slavery.

In a candid chat, Faisal spoke at length about his character in the show. Read on the interview:

What is your favorite part about donning the look of Garud, The King of Birds?

I have grown up watching Marvel movies and mythology is one of my favorite genres. I was really looking for an opportunity to play a role where I would get to have some kind of superpowers. Garud has wings since I am the King of Birds, I can fly.  Playing the role of Garud fills me with so much pride and it is such a powerful and wholesome character so I am really enjoying my time. It feels so great to be a part of a show which is the perfect mix of everything I had manifested.

Essaying the role of Garud, have you had any learnings or personal takeaways from the character?

Yes definitely I have learnt so much from Garud. You see, not many knew about him but as a mythological character, he has played such an important role. Garud as a character is endowed with good values and a strict moral code. I'm blessed to essay the role of someone who has so much respect for everyone, especially his mother. There are so many other things to learn, his empathy, his way of treating everyone, etc. Everything has been very moving and it has helped me introspect and instill some of those values in my personal life.

The show is depicting the grand event of Saamudra Manthan, how was it shooting for such a complex and revered mythological event?

We were all really excited for the Saamudra Manthan, although we knew that executing such a big event was going be a huge task. As you know, Garud had to lift a huge mountain which would be used as the churning rod during saamudra manthan. While shooting that scene, it was really difficult because even the mountain model I had to lift was pretty heavy. And when you are doing such scenes, you really have to work on your emotions because I am not lifting a real mountain but it should look like I am. We also had a 50-60 feet snake made for the Manthan, so you can imagine how difficult it is to shoot around it. Despite the difficult bits, we had fun. It was one heck of a learning experience for me.

Tell us about your offscreen equation with Vishal Karwal who essays the role of Lord Vishnu in the show?

My shooting schedule is a little different from Vishal so we don’t shoot much together but I know him from before so we do have that bond. He is such a professional and genuine artist. It is such a treat to see him during shooting so whenever I get the time I meet up with him on set. I love the way he conducts himself and I learn so much from him. The way he embodies the character is amazing because he literally looks like a God when he is in the element.

What makes Dharm Yoddha Garud different from other mythological shows?

Dharm Yoddha Garud is the first show in our history which tells the story from Garuds’s point of view. The other thing that makes this show different is the VFX used, the kind of live tracking done is mostly used in movies and series so it makes our show extra ordinary. Even the casting of the character fits so perfectly and the storytelling method of the show is getting a lot of love from the audience.

What is one particularly striking audience reaction regarding your character Garud that has moved you personally?

I think my character is getting a lot of love, appreciation and acceptance from the audience. I can’t really point out one thing because the audience seems to love the story being told from Garud’s point of view. There is one fan, Preet who loved the Garud’s wings so much that she got it tattooed on her neck, so you these things touch my heart and it’s just so heart-warming to see the kind of love we are receiving from the audience.

I just want to thank my fans for all the love and support they are giving me. I just want my fans to take care of their mental health since there is so much going on in the world, so try to be kind and spread love.  I would request all my fans to watch the show because it’s so inspiring and we have put a lot of effort in bringing this Hindu mythology to you. Just stay strong and safe, take all precautions to protect yourself and your family from covid and keep pouring your love.

+ 8
2 months ago good luck faisal! i hope this show does well.