View Profile
14 years ago, Hrithik had set foot on Cannes with his grandfather J Om Prakash, as his assistant. At that time, little did he know that his own movie would premiere and he would be the centre of attraction. Hrithik Roshan with the Mexican actress 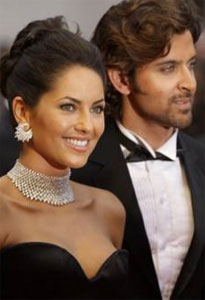 Featured Video
, Barbara Mori is making waves in the 62nd Cannes Film Festival. They arrived to the French-heaven for the premiere of their new movie "Kites" accompanied by producer Rakesh Roshan, director Anurag Basu and a few others from the cast and crew. It is the very first time for 31 year old Barbara Mori.


"Kites is a story of love that goes beyond barriers, boundaries and cultures. With an internationally renowned crew and crisp story telling we have attempted to create a film which we feel has a scope to reach wider world audience and set new benchmarks," says Hrithik while he enjoys the sun and sand. Talking more about the movie it was revealed that it has been made for "mainstream international" masses with 2 versions which were shot simultaneously, a hindi one for the Indian audience and a English-Spanish-Hindi one for the global audience. It also stars Kangana Ranaut, Nick Brown and Kabir Bedi in pivotal roles. It will be ready to be released in the last quarter of the year.


A teaser trailer and some key art posters of the film were unveiled at a press event, on the 15th of this month, which was followed by a cocktail reception, hosted by Reliance's BIG Pictures, for the film's cast, crew, international buyers and distributors.


According to sources, the teaser trailer was "scalding". "Hrithik Roshan looks hotter than ever and Barbara Mori looked a million bucks. Shot in the US, there were spectacular car chases -- with one car flying over and exploding six or seven other vehicles in a single sequence; chases in a hot air balloon -- Barbara Mori sends a rope down from the hot air balloon that Hrithik latches onto from a moving car; she leaps from one moving car onto a truck speeding alongside. Sigh! It's stuff we haven't seen in a long time with such brazen panache and reminds us of those Fearless Nadia stunts. Hrithik even speaks a smattering of Spanish as he makes goo-goo eyes. The reel promises paisa vasool; now we await the film." reveals the source.


Also in the meantime, Hrithik is catching up on the premieres of some his favorite film-makers' works, like the one of the "Bright Star" made by Jane Campion, from New Zealand.