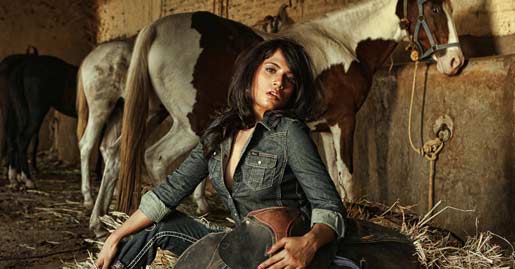 Richa Chadda, who will be seen as a roguish character mouthing foul language in the film "Tamanchey," says the traffic on Mumbai roads had already trained her in the use of such language.

When asked if she had any particular person to teach her the way of talking she has adapted for the film, Richa said: "Mumbai roads were a big teacher. Whenever I am driving, my mind is constantly clouded with such words and language. I have been living in Mumbai for five to sox years and so, I was well prepared."

Richa was seen in a similar character named Bholi Punjaban in the film "Fukrey" as well, but she says the two characters are very different.

"There is no similarity between the two. I started working on 'Tamanchey' before 'Fukrey.' The only thing is that both are very confident characters. But this girl (in 'Tamanchey') knows how to use her sexuality to her advantage," the 25-year-old said here Thursday at the film's trailer launch.

"She is confident and uses her charm. Bholi didn't need to, she had a lot of people working for her," she added.