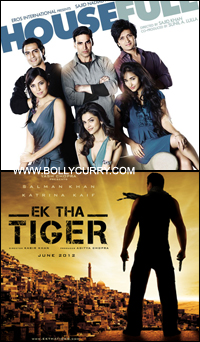 2012 could very well have been a huge clash at the box office. However Sajid Nadiadwala has shown a softer side after deciding to prepone the Housefull sequel, directed by Sajid Khan, to June 15th.
But the producer insists that it's not a financial decision, but one made from the heart as he could never go up against close friend Salman Khan, an actor who he more considers like his brother. However, the reason for pulling his movie forward by almost two weeks is down to the fact that other biggies will also be releasing at a very similar time, with early April the only slot available.
Housefull 2, alongside Akshay Kumar, Ritesh Deshmukh and Boman Irani, boasts a huge star cast with the likes of Asin, Mithun, Bachchan Sr., Rishi Kapoor and John Abraham.
Meanwhile Ek Tha Tiger reunites Salman Khan with Katrina Kaif in this romantic thriller.
Here's hoping both the movies now get all the success they deserve!
Editors: Hershi & Jenifer
Graphics: Pooji