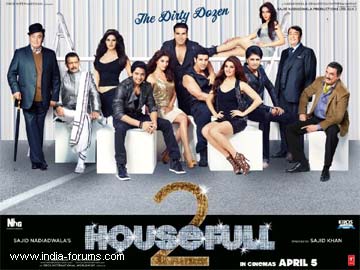 Desires and wants are the addictives that can amplify gluttony to an extent where integrity is shrouded by the counterfeit of spuriousness. Such is the movie Housefull 2 which is produced and directed by Sajid Khan after the pretense commercial success of Housefull 1.

The story revolves around the three fathers who yearn for well-heeled spouses for their three daughters. Each son-in-law pretends to be the wealthiest one. Apiece character is phony, dodgy and on the blink, however, none of them can countenance each other but each of them dwell in the same house. There is no storyline attached in the movie but doesn't promise a laugh riot throughout the movie other than few good punches that kept the spectators enthralling.

Some perplexing sequences amalgamated in the movie were amusing if not a hoot. But the item song "Anarkali Disco Chali" of Malaika Arora and "Papa Toh Band Bajayein" which is an adaptation of Australian DJ and Melissa Kool's "We Speak No Americano" was mass appealing but doesn't form the whole of entertainment package. The chemistry between the actors was good enough especially between Akshay Kumar and John Abraham, however, John's effortful acting does not make the grade to entertain the spectators whereas Shreyas Talpade's acting deftness could have been better if it was efficiently employed, while Ritesh Deshmukh's adroitness over acting was neat and reasonably good. As far as the three beauties are concerned namely Asin, Jaqueline Fernandes, Zarine Khan and Shazhan 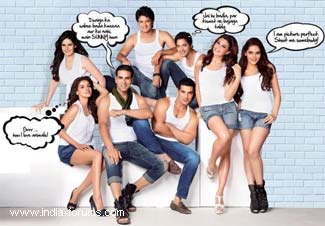 Padamsee, their acting dexterity is quite good but a room for improvement is needed. The veteran Rishi Kapoor and Randhir Kapoor along with the disco dancer Mithun Chakraborty proved best of their acting dexterousness in the movie.

The direction and the cinematography have scored an average along with an average screenplay, as the transition in the scenes do not sail you through the movie smoothly due to its unfinished touch. Due to the frail content and not so comical gags, the film's overall projection towards the spectators at a certain stage is comparable to a Tom and Jerry series but has managed to maintain that balance by not making it a chaos while the plot gets unfurled progressively.

The film has endeavored to entertain the audience with a half baked script and content encompassed with average gags which has consistently maintained the standard of compulsory laughter that was evident in Housefull 1 and now to an extent in Housefull 2 as well.  This movie has propelled to pioneer a new genre of "forced comedy" though not much appealing but can be entertaining if one has got nothing enjoyable to do this weekend.