Mumbai, Sep 12 (IANS) After 'Chamku', Bobby Deol will feature in two more home productions and says the films made by his own banner gives him a chance to play the kind of roles he wishes to play. 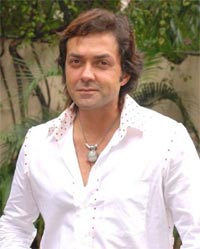 Featured Video
'I have realised home productions give me the choice to do the kind of films I want to do. Outside producers only come to you with the films that they believe in,' Bobby told IANS in an interview.

Bobby has become pro-active - he had been a part of the music sitting, pre-production, post-production of his recently released 'Chamku', which was produced by his banner Vijayta Films Pvt. Ltd.

'It's ('Chamku') my baby. And I want to do this more often. It's with my new film that I've become involved with our home production. I was involved with its shooting and post-production. I was like an apprentice on the job, learning about how to produce a film. My brother believes I've been lazy,' said Bobby.

Like his father Dharmendra and elder brother Sunny, Bobby is now fully into family concerns. But he is not ready to direct a film yet.

'I've been part of this industry for years. And my brother is into direction. I don't feel ready for it. I wish I was.'

What Bobby is ready for is another film with his father.

'There's no other way we can come together on screen. Sangeeth Sivan is directing it. It's the story of a father and son discovering each other during a journey.

'Then I'm doing an action-comedy with Sunny Deol. But it won't be just fun. We brothers will share a lot of emotional moments. We can't come together without sharing emotions. That will be directed by Samir Karnik, who is another of my favourite directors. I've done two films with Samir and we Deols are very impressed by his work.'

Asked about outside films, Bobby said: 'Though I'm open to outside offers it's definitely more productive to do home productions where everything is under our control. And we have three in-house actors.'

Dharmendra recently underwent knee surgery in the US.

'And he has recovered very well. I'm dying to work with him. We start in October end.'