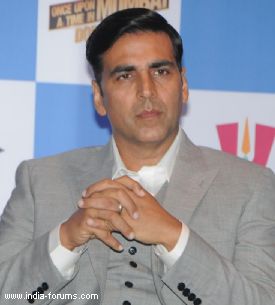 Akshay Kumar, who will be seen as a Defence Intelligence Agent (DIA) in his forthcoming film "Holiday: A Soldier Never Off Duty", says he enjoyed the role "more than I ever imagined".

"...It's the first time that I'm playing a DIA, a role I've enjoyed portraying more than I ever imagined," Akshay said in a statement.

"The next time someone asks me what I'd have done if I weren't an actor, I'd say that being a DIA is on the top of my list," he added

The action-thriller has been directed by A.R. Murugadoss and produced by Vipul Shah.

"To work alongside my long time friend Vipul after so many extraordinary films together, on a project that is helmed by Murugadoss, is of course something I couldn't wait to get my hands on," said Akshay, who teamed up with Shah for super hits like "Waqt - Race against Time" and "Namastey London" in the past.

Murugadoss, who has also directed southern films like "Thuppakki" and "Stalin", was a little apprehensive before he took on the film.

"I was a little reserved initially, but Akshay made me feel comfortable. Now, I can say that I've got a close friend in the Hindi film industry," said Murugadoss.

The director also praised Shah for his support and added: "Being a filmmaker, Vipul sir lends his directors great support."

Being presented by Reliance Entertainment, the film will hit theatres June 6.