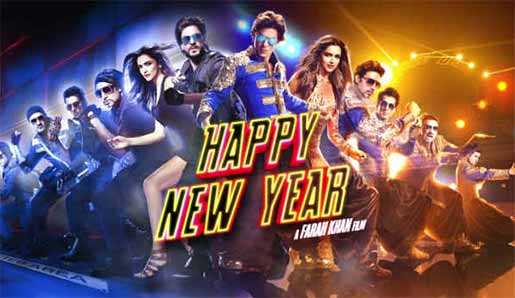 The journey of "Happy New Year" has continued to be quite happy during its second week too. So far, the entertainer has netted almost Rs.180 crore at the Indian box office.

Red Chillies Entertainments Pvt. Ltd. Monday announced that "Happy New Year" had a strong showing at the domestic box office in its second weekend as it collected Rs.22.23 crore for a total Rs.179.80 crore so far.

"The positive trends in collections across India show that the audience have loved 'Happy New Year' and the families have gone to the theatres to get fully entertained," Venky Mysore, CEO, Red Chillies Entertainment, said in a statement.

The film became the quickest to make Rs.100 crore, said a statement.

Exhibitors are happy that the movie has found resonance with audiences of all age groups.

"The film, after completing seven-day run, became the most preferred for the families in the second weekend too. The number of Friday was bettered by Saturday, and Sunday was 40 percent better than Saturday - which only goes on to give the indication that families and people who couldn't catch the film in the first week came to the theatres," Anand Vishal, head (Sales and Operations), Fun Cinemas, said in a statement.

There were also audience members who came to see the film on repeat value, Vishal said, and added: "We feel that the film will stay in the forefront for the next 10 days or so."

Anant Verma of DT Cinemas said: "The film has held well again over the weekend with 60-65 percent occupancy."