Kabhi Kabhii Pyaar, Kabhi Kabhii Yaar has one of the hottest and popular Jodis of Indian Television Hiten Tejwani and Gauri Pradhan as a team with none other than Nandini Singh of Kesar fame as Hiten’s Yaar in the same team. Hiten shares a fabulous chemistry with both Gauri and Nandini on screen. Here’s all three in a heart to heart conversation with our Telly Buzz reporter, Binita Ramchandani... 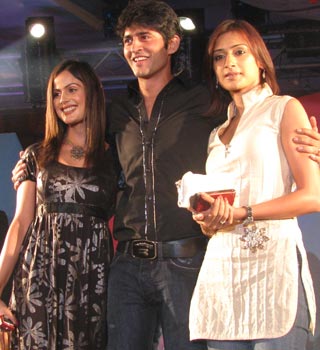 Featured Video
Firstly tell us something about the concept of the show Kabhi Kabhii Pyaar, Kabhi Kabhii Yaar?
Hiten: As you know in Kabhi Pyaar, Kabhi Yaar I have to perform with my Yaar and my Pyaar (holds Nandini and Gauri with a grin on his face). Actually you will get to see my chemistry between me and my wife and my yaar Nandani. And you will get to judge who is better with whom, is it so?
Gauri: Actually they won’t get to judge!!
Hiten: True, there is no public voting this time, but of course you all can sit, watch and judge!!

Hiten, we already know that you share an amazing chemistry with your wife Gauri and now it’s Nandini too with you, how will you manage?
Hiten: That's what I am saying that you have to wait and watch!!
Gauri:  Hiten shares a good chemistry with every girl, so that's not a problem with him!!
Hiten: Well you can say that (laughs).
Nandini: I must say that he is a fantastic actor, so he can mould himself according to the character and no one has a problem with him ever. Above all he is my personal favorite too.

What is more important in real life, Pyaar or Yaar?
Hiten: Actually both are important at their respective places.
Gauri: In real life Pyaar better be important!!(Laughs aloud)
Hiten: Yaa, Pyaar is important. I am not saying that yaar is not important. It’s also important.

Hiten, how are you handling both the girls?
Nandini: I will want to answer this question please!! I must say that its not he who is handling us, in fact we are handling him. Most of the time, it is Gauri saying, “Hiten don't do masti and rehearse properly with Nandini”

All three of you have been associated with Balaji, how does it feel to be together again in a Balaji show?
Hiten: It feels like home actually, and it’s nice.

How different is it to be a part of reality show than a serial?
Hiten: It’s very different. When one is doing a serial, one has his or her character written out, but it is not same here. Here it is a competition where everyone is himself or herself. Finally one doesn't have to act.

Then what about the Tamashas that we see on television?
Hiten: We have never been a part of such a thing and will never be.
Gauri: We know that we have come to dance and we will focus on that and will not do anything else.

How is the work atmosphere here and why did you opt for this show?
Gauri: We have been part of a long running reality show earlier where we used to rehearse for approximately 8 hours a day. So we know the pros and cons. We opted for this show as the concept was very different and must say the atmosphere is also great.

Do you feel that now you are part of the Balaji camp?
Hiten: There is nothing like that.
Gauri: We have done Nach Baliye before which was not a Balaji show. As I said before, the concept of this show is very good and since its Balaji's first trio show, it feels wonderful to be a part of this show.

Message to India-Forums fans!!
Hiten: I get to know whatever you write, whatever you quote and whatever you criticize and also what you want us to do. Thanks for everything!!
Gauri: (Making it short) Please watch us on Kabhi Kabhii Yaar, Kabhi Kabhii Pyaar only on Sony Entertainment Television.

14 years ago ya ght yerterdya rock the show but judges were rude .........ght were lookign tooo cute anyway for ght fans they r the always the best

14 years ago It will be gr8! fun to watch Hiten Gauri my bets pair together.

14 years ago ya they acted tog in kesar ...anyway its better she is with them .......anyway lets wait n watch .......ght will diff rock the show with their perfs

+ 2
14 years ago can anyone pls tell me when were hiten n nandini together..i dont remember

i love Hiten and gauri jodi!

14 years ago Ya thanks u 4 this article i love hiten and gauris chemistry and i watch it to see them.