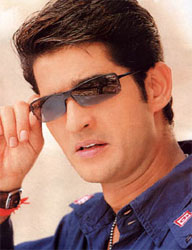 The very popular Hiten Tejwani is back on television with the screen name of Karan that made him popular in Kyunki Saas Bhi Kabhi Bahu Thi.  Yes, you heard it right, and the actor is all set to enter in NDTV Imagine's Kitani Mohabbat Hai tonight.

We called the actor who has started shooting for the show yesterday. "The name of my character is Karan Singh, and he is a big musical sensation. He comes to Shimla to judge a music competition, in which Aarohi (Krutika Kamra) is also participating".

On his character, Hiten quips "Karan is witty, naughty and extremely positive. Though there is no difference in my look in the show, I can very well say that this is a different avatar for me".

When asked about the duration of the role, the actor states "I will be entering tonight, and will be seen for two episodes. After a while, I will make a comeback and will be there for ten episodes or so. Beyond this, I do not know anything about the future track".

However, according to our source, "The actor will be seen playing a pivotal role and the story line will get a new twist with his presence in due course of time".

Recently, Hiten Tejwani was seen as host along with wife Gauri in Nach Baliye. The duo was also seen in Kumkum.

Well, wonder what's the big twist in the budding love story of Arjun and Aarohi??

But for now, it's time for Hiten fans to rejoice…

+ 2
13 years ago hiten is looking so hot and he is doing a great job ,if gauri will also enter there opposite him then it will be icing on the cake.

13 years ago He was Karan In Kyunki as well oddly.

13 years ago omg he is damm cute! just saw today''s epi! n the way he talks to arjun is so funny!

13 years ago i jus hope he doesnt get in between arjuhi....cos they have jus got together!!!

Queen_GHT 13 years ago Luv him so much...But he deserves much better role..bt anywasy he rocked in his every role,gonna rock again & i want to see only him,plz not those actresses..because...only Gauri looks best with him..anyways gud luck to Hittu!!!