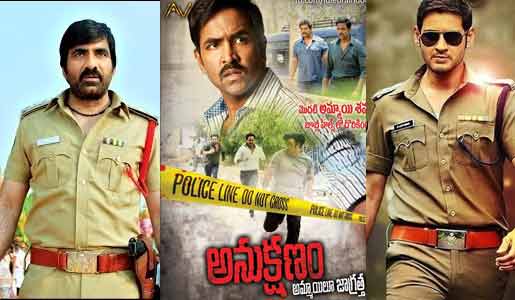 It will be guns, khaki and bullets this September in Telugu filmdom as three star-studded entertainers on the police - "Power", "Anukshanam" and "Aagadu" - are slated for release over the course of the month.

The first of the three films will be Ravi Teja-starrer "Power", which is releasing Sep 5.

Ravi will be seen in a rough-and-tough police role in "Power", which is directed by writer-turned-director Bobby. This will be the third time he will seen playing a police officer in his career after "Vikramarkudu" and "Mirapakaya".

Manchu Vishnu plays a police officer in his late 30s in pursuit of a psycho killer in the film.

"This is probably one of the toughest characters I've played till now. It's also one of the most tiring films of my career. There are no breaks when you're working with Varma and it is so because he wants you to be in the character at all times. It left me mentally exhausted," Vishnu had told IANS.

On Sep 26, superstar Mahesh Babu-starrer "Aagadu" will hit the theatres.

After "Pokiria and "Dookudu", Mahesh Babu will be seen donning the khaki for the third time in "Aagadu".

This is Mahesh's second film with filmmaker Srinu Vaitla after "Dookudu", and the duo is hoping to repeat their success. In "Aagadu", Mahesh will be seen delivering his dialogues in the Rayalaseema dialect.