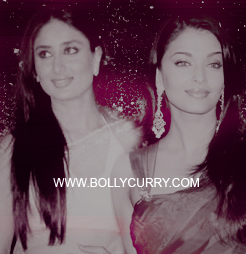 Bachchan in his next big ambitious project, Heroine. The film was said to have been revised several times to reduce the objectionable and intimate portions for the Bachchan bahu. But with Ash's pregnancy hitting the tabloids, Madhur seems to have been put in a fix. While being genuinely happy for Ash, Madhur was also not too keen on delaying this dream project of his any longer.


After expressing his disappointment in his blog with Ash's non-professionalism at not informing him about her impending pregnancy during the signing of the film contract, we hear that Madhur has gone on and approached Kareena Kapoor to play lead in Heroine. Bebo was said to have been Madhur's primary choice for this film incidentally, but talks did not materialize with the actor. However, now, Kareena seems to be giving this prestigious offer a second thought.

When questioned about the same at a recent press meet, the Kapoor girl refused to reply, neither dismissing this news as untrue, nor affirming it in any way.

Well, we hope Madhur's 'Heroine' gets to see the light of day sooner or later without furthermore delay!