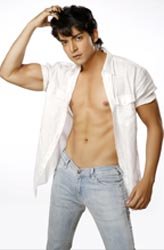 According to our source, "The present track revolves around the wedding preparations of Geet (Drashti Dhami). There will be a scene wherein Geet and her family members go to a nearby mela. Due to certain unavoidable situations, Geet loses track of her family and is seen wandering alone. This is when a group of guys try to behave badly with her. She runs to save herself, and in the process falls into a lake. And the hero, Gurmeet will make his dramatic entry then and save Geet from drowning".

Elaborating on Gurmeet's character in the show, our source states, "His name is Maan. He is basically an angry young man like character. He is disillusioned from the entire world, very silent and loves to lead a lonely life. He sees Geet in a problem situation, saves her life and leaves her without talking a word. This will be the first encounter between Geet and Maan", informs our source.

When contacted, Gurmeet told us, "Yes, I will be entering the show sometime next week. I play Maan, a guy who is a recluse".

The show has begun really well, and we wish Gurmeet all the very best for his new stint.

Gurmeet Choudhary
.
.
he Is the true Star

chavvi.prasad 7 years ago God bless you Drashti Dhami
Have a wonderful day
love u so much

ChannelizedWing 7 years ago Good Morning
Love you Drashti Dhami
Have a wonderful day
God bless you...

priyakhanna21 7 years ago Drashti Dhami luving u so much princess hope u enjoyed sunday fully this new week gives lots of happiness to u and ur show and hope that ur show got very high trps god bless u angel all d very best for JD and waiting for 1st june and to see u in dance floor...luv u angel

Love u so much my angel