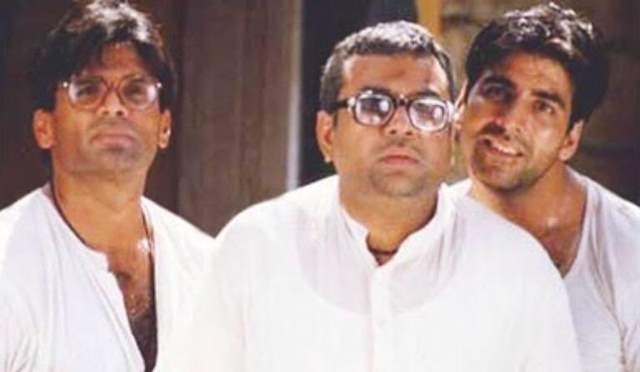 Priyadarshan’s comedy-drama ‘Hera Pheri’ is one of the iconic films of Bollywood and continues to remain a crowd favourite. The fun camaraderie between Akshay Kumar, Paresh Rawal and Suniel Shetty as Shyam, Raju and Babu Bhaiyya in the film was a big hit. The first part became a cult hit in 2000.

It’s been 21 years since the release of Hera Pheri and the lead actors, Akshay Kumar and Suniel Shetty have something special to say.

Suniel Shetty took to Twitter to share a picture from the movie and wrote, “No wonder we underestimate how quickly time flies. It seems I blinked, and 21 years went by. What a film we made @priyadarshandir @akshaykumar  @SirPareshRawal @GulshanGroverGG #Tabu. Missing #OmPuri ji very dearly today...”

His co star, Akshay Kumar reacted to the post and replied back by sharing his favourite scene from the film. Akki commented, “Agreed! Even we didn’t know back then what a film we were making, each scene better than the other. Specially love this one : dhoti (laughing emoji) Genius of Priyan sir and epic dialogues by late Neeraj Vora.”

Last year, several reports about Hera Pheri 3 made the rounds. In an earlier interview, Suniel Shetty who played one of the three main leads in the film had revealed that the third instalment of the film is on hold as there are certain ‘differences’ that need to be ironed out first.

There were also reports of actor Kartik Aaryan stepping into the shoes of Akshay Kumar for the third part. However, no update has surfaced on this yet.

1 months ago Waiting for Hera Pheri 3. Would be nice to see these guys together one last time.

1 months ago One of my all time favourite movie 🤩