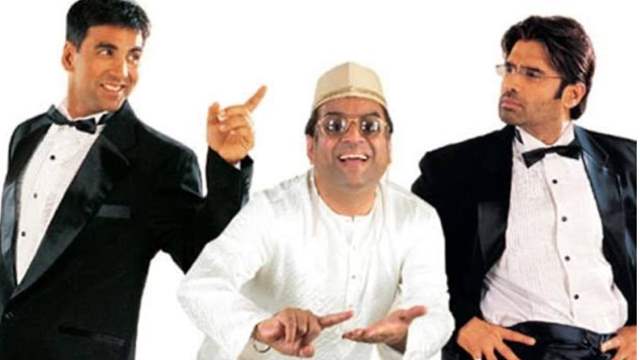 The iconic Priyadarshan comedy film ‘Hera Pheri’ completed 21 years since it’s release. Starring the terrific trio of Akshay Kumar, Paresh Rawal and Suniel Shetty as Shyam, Raju and Babu Bhaiyya, the film has a special place in the hearts of the audience till date.

After the humongous success of the first part, the second instalment, Phir Hera Pheri, was released in 2006 and was received equally well by the audience. The audiences have been eagerly waiting for the third instalment of the film, and finally the wait has come to an end.

Hera Pheri 3 is finally happening and producer Firoz Nadiadwala has himself confirmed the exciting news. While speaking to Pinkvilla, he confirmed that the script has been locked and the cast Akshay Kumar, Suniel Shetty and Paresh Rawal will resume the story from where the second part ended.

The script is finalised and you will hear an official announcement soon. The idea is to have not just Hera Pheri 3, but several more Hera Pheri’s and we are working keeping that in mind.

Firoz speaks about the pressure of taking forward a cult franchise like Hera Pheri and says that the team has to be careful with the story, screenplay, dialogue to deliver the best. He adds,

We were being extra careful on the script. Now that we have things in place, I can say, banegi tab do teen Hera Pheri saath mein banegi, Inshallah. We will make up for the time gap between part two and three.

While the first film ‘Hera Pheri’ was directed by Priyadarshan, and the second instalment ‘Phir Hera Pheri’ was helmed by late director, Mr. Neeraj Vora. Details about director of Hera Pheri 3 are yet to be known.

1 months ago Wow this is great news! Can't wait for this one! Please bring back Priyadarshan as the director for this one.