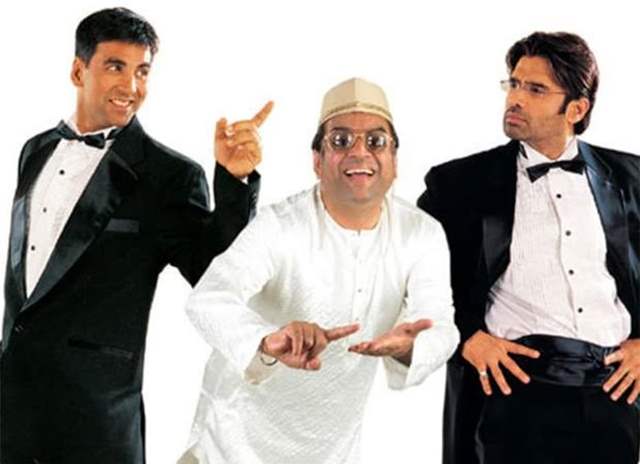 Hera Pheri, and notably Hera Pheri 2,are both cult classics that never gets old. Memes from the film continue to create waves on social media, and practically every generation has a connection with the film franchise. The market has been buzzing for a long time about the third chapter of the film franchise, and now the makers have hinted at it.

The third instalment of the iconic comedy-drama Hera Pheri, starring Akshay Kumar, Suniel Shetty, and Paresh Rawal, has been announced. In a recent interview, producer Firoz Nadiadwala said that Hera Pheri 3 is in the works and that it will feature the original cast.

Talking with Bollywood Hungama he said,

“You will get to see it very soon with the same star cast – Akshay Ji, Paresh Bhai, and Suniel Ji. The story is in place, and we are working on certain modalities. It’ll be made in the same way, retaining the innocence of the characters. We can’t take past achievements for granted. So, we have to be extra careful in terms of our content, story, screenplay, characters, mannerism etc."

Priyadarshan directed the first film, and the late Neeraj Vora wrote and directed the follow-up. Raaj Shaandilya, who directed Dream Girl, is reportedly in talks to direct Hera Pheri 3, but Firoz Nadiadwala said that rumour is unfounded.

He also said that although the crew had begun working on Hera Phera 3 in 2014, it was forced to halt production when Neeraj Vora became ill. But there will be a lot of changes in the story and characters in the new film.

1 months ago Ah this is good news. I wanna see the 3 of them one last time before they all retire. It would be a good closing to the franchise. Hopefully it's an original script. The first 2 movies were plagiarized from Hollywood.