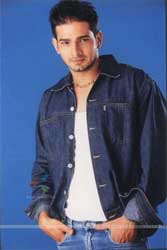 Hemant Thatte who was seen essaying the role of Kshitij in Zee TV's Ghar Ki Lakshmi Betiyann went missing from the show all of a sudden. And now the actor is back after a hiatus in COLORS and Rose Movies Thoda Hai Bas Thode Ki Zaroorat Hai which is to launch on June 7th at the 7.30 PM slot.

When we met Hemant Thatte, we inquired about his sudden break and he disclosed that he in fact had a major health problem that forced him to stay away from work. "I did not take a break wantedly. Actually I had this Spondilitis attack all of a sudden when I was shooting for Betiyann. My condition was very bad and I could not manage doing even the normal chores at home. When I visited my doctor, he suggested complete bed rest for two months. He insisted that I follow this as that would mean a speedy recovery of my back. As advised, I took this break and rested my back well,  and now all is well (smiles)".

"When I was planning to take up a show, Thoda Hai happened and I felt extremely happy as it meant working again with Romit Raaj. Hence I accepted it whole heartedly", informs Hemant.

We wish Hemant a very happening second innings on television..

Shaina_b 10 years ago The show sounds boring though!!!!

~*puja*~ 11 years ago i really don''t get it sometimes, he says he doesn''t want to talk about it ... but this article exist because he discussed it, right?