We have seen lot many super duper films of yesteryears being made into remakes!!. But it is for the first time that we are looking at a blockbuster film like Seeta Aur Geeta being made into a serial. 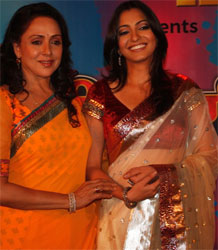 Featured Video
And to promote the remake was present at the launch conference the 'Dream Girl' Hema Malini, who played the dual role in the very popular original. Seeta Aur Geeta will be aired at the 9 PM slot from May 25th on NDTV Imagine, and playing the dual role is debutant Anjori Alagh. Playing Sanjeev Kumar's role will be Cezanne Khan while Gaurav Dixit will play Dharmendra's role.

Hema Malini whose contrasting performances as Seeta and Geeta in the film is remembered even today, offered some tips to the new girl Anjori on the roles she will be playing in the show. "Anjori has her own personality, and I would want her to portray the roles accordingly. She should not copy the way I enacted the roles; it is fine if you copy the characters, but she should come up with her own expressions and reactions. This will probably bring out the best in her, and she can come up with a better performance too", quips Hema.

The popular actress was initially taken aback when she heard that Seeta Aur Geeta will have a remake. "I did not like the idea of a remake to begin with, because there will arise so many controversies and comparisons. But this is the first time that a film is being made into a serial, so I am very excited about it and happy too. Since this is a serial, it can go on for a longer time. Also, it is on the popular NDTV Imagine channel, so it is good for all", states the Diva of yesteryears.

Anjori who gets into the skin of the characters played so effectively by Hema is equally excited about the show. "I am happy and excited. I chose this show because these are challenging roles to essay. And the fact that this is a remake of a super hit film motivates me even more. Hemaji was fabulous in the film, and it feels so great to be playing the characters she played".

Well, let's see how differently Anjori plays the timid and tom-boy characters in the show..

neha.namrata 12 years ago happy mothers day have a great day with ur family sorry 4 not telling my name is Priya and l''m 4rm nz, hamilton

+ 5
12 years ago All the Best to the Show really looking foward to it.. Hema ji was FABULOUS in Seeta Aur Geeta.Thta''s really nice of her to offer tips to Anjori.
Is it going to be a daily or only on weekends thats what confusing me:S.