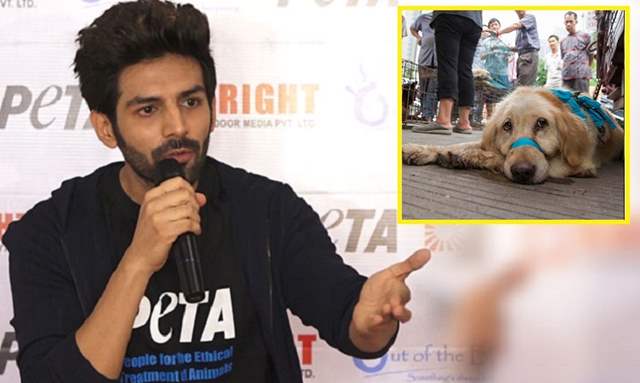 Kartik Aaryan is one of the sexiest vegetarian hunk in tinsel town and has been even conferred with this title on several occasions. The young rising superstar is a vegetarian and loves animals like no one else. No wonder today he has taken to his social media to express his dismay over a festival that brings cruelty towards dog.

Kartik Aaryan has taken to his social media account recently and shared a picture which he had shot for an animal-welfare organization and his caption reads, "Har saal dil todte hain yeh Yulin Festival waale ?? #StopYulin #YulinKMKB"

The actor is one of the first Indian celebrities to raise his voice against this festival that happens annually in Yulin, China. The festival basically slaughters dogs and every year innumerable four-legged pet are slaughtered as a part of the festival.

This festival is seen as a cruelty tradition worldwide and some even term it as inhumane as its fatal for dogs. We’re really proud of Kartik Aaryan to voice his opinion and express his worry over this cruel festival that brings a death-knell for dogs.

Kartik Aaryan has time and again expressed his love for animals and how he stays away from meat even when he has to bulk up for his movies. Kartik Aaryan had opted only to vegetarian food and leafy vegetable to turn into a beast mode for a song in Sonu Ke Titu Ki Sweety in 2018, since then he has maintained a fit body by following a clean diet.

The actor’s love for animals is really inspirational as its not just limited for social media posts with their four-legged darlings, but even believes in ending animal slaughtering. Always a youth icon in more than one way.

Funny29 3 months ago You're the best. I wish there were more people who are fighting against it