After crossing the big Kasautii, Shweta Tiwari has taken up a new Challenge. She has been seen acting, dancing, singing and now she will also be seen mentoring. No, she will not teach acting, but this beautiful dancer will be seen choreographing and motivating her team to dance in the new reality show on 9X, Yeh Hai Jalwa.

Here is the actress talking of the reality show, her team 'Bahu Ki Behnein' and her plans... 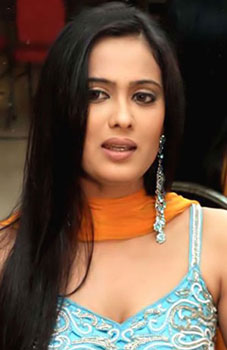 Featured Video
Tell us something about Yeh Hai Jalwa?

Yeh Hai Jalwa is a dance reality show that has a unique concept and is completely different from all other reality shows. In this show, we celebrities are not only going to participate, but mentor as well. Here we get a chance to showcase not only our talent as dancers, but also as choreographers.

You have done it all; acting, dancing and singing and now you’re doing mentoring, so how does it feel?

It feels great as it is something different. I have never tried my hand at mentoring. I always try and make it a habit to do something different. I took part in Nach Baliye as I love dancing. I cannot sing for nuts, but yet I participated in Jjhoom . And now I am doing Yeh Hai Jalwa. Having so much versatility keeps me charged.

You say you love dancing but are not a good dancer, so what strategy are you going to use to train your team?

Yes I love dancing but I am not a very good dancer. Many a times I miss my own steps while performing on stage. I plan to rehearse a lot with my team and make sure that they learn the steps and perfect them as they are housewives who are pretty clueless when it comes to dancing.

Tell us something about your team – the Bahu Ki Behnein?

My team is Bahu Ki Behnein which comprises of housewives, they are not professional dancers. They have danced only at functions and have never faced the camera.

How did the selection process happen?

There were a lot of contestants from whom I had to select five people to be part of my team. The selection was mostly based on their coordination. There were some who danced well, but they did not have good facial expressions, while others had expressions but were not very good in dancing. I selected them based on their hand and body coordination.

So who is your biggest contender in the show?

No-one. I am the weakest competition in the show (laughs). So nobody should have a problem with me.

There are so many new reality shows coming up on television. Don’t you think it is becoming too monotonous for the viewers?

No actually I think people like reality shows better then all the dramas. The fiction shows are what have become too monotonous nowadays. People are tired of seeing the same old stories and faces in the serials happening on all channels. In fact I feel reality shows are better because at least here the audience gets rid of the person they don’t want to see.

Kasauti Zindagi Kay was one of the longest running shows and appreciated by the audience, so was it the right time for it to wind up?

Yes it was the perfect time for the show to end. It had been running for the last seven years and now people were starting to get bored with it. So it was time to wind up the show. And the show wound up with a perfect last episode too.
You were in the show right from its inception; did you not find it monotonous after a certain point of time?

Well yeah it did get boring after a certain point of time. I mean anybody gets bored if they have to follow the same routine day in and day out. That was the same that happened with me when I was doing Kasauti Zindagi Kay. But no matter what, I enjoyed doing the show.

So what are your future plans?

There is nothing finalized yet. So far all the offers I have received have the same concept and I don’t see anything different in them. When I find something different I will take up the offer. And I am not ready to do anything new right now either. I plan to concentrate on this show and by the time it winds up, I will be rejuvenated to take up a new offer.

14 years ago thanks for the article. i personally, liked saawariya and thought that ranbir kapoor acted really well.

14 years ago I seriously think she doesn't know what PERFECT means...
lol but i still LOVE her

14 years ago i so loved her as Prerna...but looking forward to see her in YHJ..

+ 2
14 years ago omgggggggg she is da best dancer in television..cant wait to see her in ye hai jalwa..woww she is going to rock again..