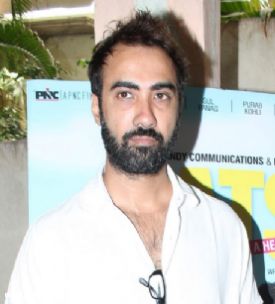 He'll be remembered for his accurate comic timing and effortless humour in films like "Bheja Fry" and "Khosla Ka Ghosla", but Ranvir Shorey does not think he has managed to make much of a mark in the Hindi film industry. Anyway, he has no grudges and says that sometimes things don't work out as expected.

"I don't think I have really made a dent in the film industry as I would have liked to. There are many reasons for that. Bollywood is not an even playing field. Under the circumstances, you do the best you can," Ranvir told IANS on the phone from Mumbai.

But the 41-year-old has managed to come to terms with his failures, which he feels are far fewer in number than his successful blockbusters.

"Sometimes the choices you make work well and sometimes they don't. I like to think that I have more successful films than unsuccessful films. Films which have not been received well by critics or the box office are far fewer than the ones which have done well. I hope I can continue making those kinds of wise choices," he said.

It is safe to say that comedy is one of the "wise choices" which Ranvir has made. As long as he can balance these rib tickling roles with other meaningful ones, he is satisfied as an actor.

"I think humour is an inherent part of me. Why I keep getting more comedy roles is because I have been more successful at them. That image of comedy and me continues. I don't have a problem with that as long as I am getting dramatic roles and I am doing well in them," said Ranvir, who has made many laugh with his performances in films like "Singh Is Kinng" and "Chandni Chowk to China".

He is married to Konkona Sen Sharma, but the two barely discuss their movie projects.

"It is not like she reads my scripts and I read hers. We have too many other things to worry about than to start putting double the effort in each job," he said.

The two, along with their son Haroom, who will soon be three, love "hanging out" as a family.

"We love spending time at home with Haroom. The three of us love hanging out. We love going to friends' places for dinners, lunches. I have a great friends circle. That keeps us busy," he said.

The actor will be seen soon in action-adventure show "Khatron Ke Khiladi 5" but said that he was warned by his wife to think about his participation.

"She is a far more cautious person than I am. She asked me to think this through if I really wanted to do this, specially now that we have a baby," he said.

But nevertheless, Ranvir is looking forward to being a part of the show, which will help him overcome many fears, loneliness being on the top of his list.

"I think the biggest fear which I have faced in life is being alone. I don't know if this show will be able to tap that or not. But I feel that there are plenty, which it will tap into," he said.

With an endeavour to always try to "do something different", the actor is also keen to venture into writing or direction.

"I am keen to start something else with acting...maybe writing or directing. I am keen as Haroom will be three in a month and will start school. I feel I should start something which involves me every day, rather than in spurts," Ranvir said.

On Return to TV, Ellen Addresses 'Toxic Workplace ...
46 minutes ago

Kaveri Priyam on Being Disappointed With 'Yeh Rishtey Hai ...
56 minutes ago