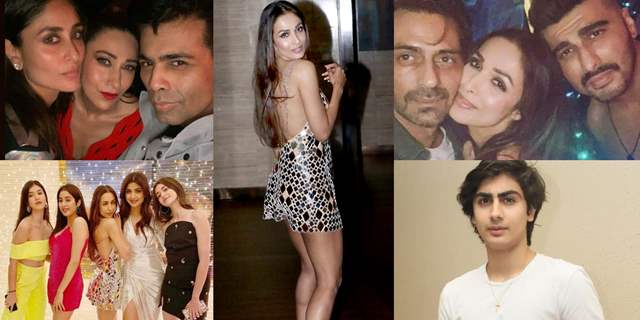 It was a night to remember as the who's who of B-town came down to ring in Malaika Arora's 46th birthday. Not only did everyone let their hair loose on the dance floor but also rocked the night flaunting their stunning, shimmery outfits.

For birthday girl Malaika, age is just a number as the actress refuses to grow old. Throughout the night she was spotted burning the dance floor with her killer moves. Her resplendent shimmery outfit took everyone's breath away and she looked nothing less than a combination of gorgeousness and sensuous.

While the party was nothing less than a glamorous affair with B-townies having a gala time, it was Malla's (Malaika's nick name given to her by her close industry friends) son, Arhaan Khan and Arjun Kapoor's bonding that caught the onlookers attention.

Malaika and Arbaaz's son, Arhaan has maturely accepted his parents' separation and the ex-couple too never walk away from their parental duties and had spoken to their son before getting into their respective new  relationships. They also took him out on lunch and dinner dates with their new partners earlier. And now, it seems Arhaan has accepted his mom's new partner, actor Arjun Kapoor with open arms.

Last night, in the party he was spotted bonding with the actor and the two guys came together to celebrate their darling lady's birthday without giving way to any sort of awkwardness. While the birthday bash, both the guys were by Malaika's side and she too fed them pieces of cake along with warm hugs. It surely was a lovely sight for everyone present at the bash.

Talking about the bash, the list of attendees included, Kareena Kapoor who stole the limelight with a striped full sleeves top and pencil skirt followed by sister Karisma Kapoor who opted for a red-hot outfit. Filmmaker Karan Johar who always has his style game on point, emerged in style flaunting his eccentric fashion game. Malaika's sister, Amrita Arora looked stunning in her party outfit.

Check out some videos and pictures from the bash below:

Arjun is Head Over Heels in Love with Malaika, Opens up about Marriage ...

Sushant's Sister Loses Cool as Investigative Officer ...
an hour ago

From video calls to sending Rakhis: Celebs share their ...
2 hours ago

Sushant Singh Rajput's Sister Pens an Emotional Poem for Him ...
2 hours ago