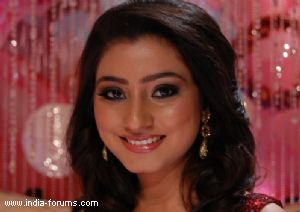 TV actress Neha Marda, who rose to fame as Gehna in popular daily soap 'Balika Vadhu', returns as small town girl Urmi with 'Doli Armaanon Ki'. She is happy to get into a character she can identify with.

In 'Balika Vadhu' too, her character was of a teenage girl, but matured and different as she played someone who is forced to marry a middle-aged man.

But 'Doli Armaanon Ki' is about Urmi, a young girl who enters the institution of marriage with hope and dreams in her eyes.

"It is very different from what I did before. Urmi's character is nineteen years old. I am glad to play something (closer) to my age," Neha said here Monday at the launch of the show.

The actress, however, admits her character was stronger in 'Balika Vadhu'.

"But the character was very strong and I got a lot of name and fame because of it. I am very happy," she said and added that she quit 'Balika Vadhu' because she was not keen to play such a mature character.

Smiely 6 years ago What? Gehna was not 13. She was 18 when she married and then they showed 5 years lean. Which is closer to her age.

KiranlovSriti 6 years ago Hey leav this article writer, the girl who played opposite Mohit (Sindoora's son Bharat ) in "Banu Main Teri Dulhan" got award as new comer last year for her role Bhumi of "Sanskar"

well Mohit is present from 2002 (Krishna Arjun was the first show were I saw him) and Neha present from 2005 (Shara one show which was based on college lyf) she was 19 then.

aparnauma 6 years ago When did they ever say that Gehna was 13 years old???Didn't actress know theage of the character she was playing?It was clear that she was playing an 18 year old marrying someone who was more than twice her age.
Why is Mohit Mallik being termed as new comer?
Anyways all the very best to Neha.Hope her show does well

LimitLessFan 6 years ago is this article written from thin air avaye hee?????

AnjanaYYZ 6 years ago Either the actress is suffering memory loss or the interviewer - the math of Gehna (Neha's character) in BV makes no sense.

vidya0000 6 years ago She looks pretty in the promo in dak.but I thought she quit bv for her marriage not for any age issues. Good luck neha

meena678 6 years ago gehna was 18 years when she was married and not thirteen,the actress is under wrong impression of the character she played i guess.

DEE2803 6 years ago dear writer get your facts checked before writing article...the whole forum is packed with fans who keeps detail record of everything...you wont get away with writing just anything ...Mohit is a brilliant actor .. looking forward forthis show

saba113 6 years ago Mohit Malik is not a newcomer

and 19 year old character how come is closer to age of a 28 year old woman ?