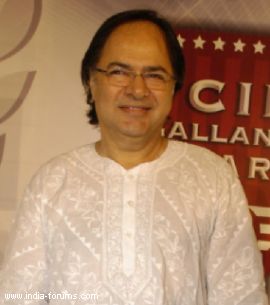 Veteran actor Farooque Shaikh praises changes in the film industry and the theatre world. He says this is a happy time to be in the movie business and adds that one can lead a respectable life by being a full time theatre artist.

"As a theatre person, I feel it's a labour of love. Things have changed and the scenario is not the same. One can be a full time theatre person and still have a respectable life. I think the positive change is finally coming," said the 65-year-old outstanding performer.

The actor, who has been in showbiz for more than 30 years and featured in films like "Noorie", "Saath Saath", "Umrao Jaan", "Bazaar", "Katha" and "Biwi Ho To Aisi", says filmdom is enjoying its best phase.

"As an actor I feel it's an interesting phase as about 400 films are being made in a year and the actors are flooded with numerous options. I think this is the happy time to be in the film industry and this excites me the most," he said.

When asked what motivates him to sign on the dotted line, Farooque replied:

"For me, even today if anything excites me to be part of a film, it's the script."

He however seems unimpressed with the quality of writing in movies.

"One thing which is very disturbing is the writing part. Writing can be given a second look and there is room for improvement on that," said Farooque.

Why is the "Chashme Buddoor" star not as active as Amitabh Bachchan or Rishi Kapoor in front of the camera?

"I adore Bachchan and Rishi Kappor; they are outstanding actors. In fact, they are stars. You see them more often because more producers want them to be part of their projects. I don't enjoy working every day," he explained.

"I am kind of a person who doesn't like to work every day. I am happy in my own space and I should be thankful that I have the privilege to sit at home and I want to make the best of it," he said, adding: "I think I am too boring to be controversial."

After a gap, he will be seen in "Club 60", paired with Sarika for the first time.

"I regret that I didn't work with her before. We never had that opportunity. She is one of the finest actors we have today. There are not too many lines for Sarika in the film, but she has played her part so well that it's commendable," said the actor who has worked with the likes of Deepti Naval and Rekha.

The actor says they had a blast shooting for the film.

"Unfortunately, we all don't have enough time to catch up with each other, but this film was fun. We spent a lot of time on the sets, we met every day and it was so much fun. We shot in Mumbai and outside Mumbai as well," he said.

exclusive
Exclusive Akanksha Puri on why it was important to leave Vighnaharta ...
33 minutes ago