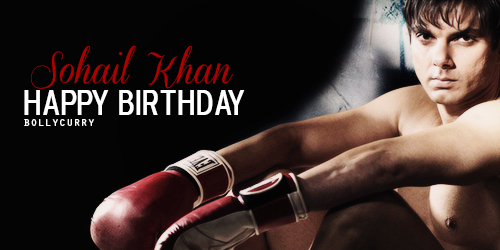 Today BollyCurry gathers to celebrate the birthday of the dynamic actor, producer and director Sohail Khan.

Khan was born to successful screenwriter Salim Khan and Sushila Chalak Khan in Mumbai, Maharashtra. His well-known family includes older brothers Arbaaz Khan and Salman Khan and sister-in-law Malaika Arora Khan. He also has two sisters, Alvira and Arpita Khan. Bollywood actress and dancer Helen is his step-mother. He is married to Seema Sachdev and the couple have two sons, Nirvaan and Yohan.

Khan began his career as a director and film producer with Auzaar in 1997, which starred his brother Salman Khan and Sanjay Kapoor. He continued directing films casting his brothers in lead roles, the most popular and successful being Pyaar Kiya Toh Darna Kya (1998) and Hello Brother (1999). Interestingly, both movies had Arbaaz Khan playing the role of an older brother in some form to Salman Khan. He made his acting debut with Maine Dil Tujhko Diya (2002) which was also written, directed and produced by him. He appeared in a few more films but did not face much success till Maine Pyaar Kyun Kiya (2005). Khan tasted his first big production success with Partner (2008), and continued the streak with Ready (2011) and Jai Ho (2014).

Khan's next directorial project is the much awaited Sher Khan, which is speculated to be India's first adventure 3D drama movie. It will be released in 2016.

Here is a mini playlist of some of his popular songs
Here's wishing Sohail Khan a very happy birthday and all the success for the future!
Writer: Peehu A.
Editors: Shreya S. and Gunia K.
Graphics: Virina R.
Do you have a suggestion or comment for BollyCurry? Drop us a PM at BC_Dropbox today!