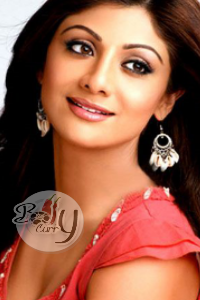 year of life. Shilpa, who was fairly popular during her peak years in Bollywood for her amazing physique, has not recieved quite as much success as is her due. She can even be counted as one of the most highly underrated actresses during her time. She has given some powerful performances in movies like Baazigar (1993), Dhadkan (2000), Rishtey (2002), Phir Milenge (2004), Life in a Metro (2007), amongst others.
Apart from her acting skills, her stint in and subsequent winning of Celebrity Big Brother UK in 2007 really catapulted her into the public eye, not only in India but abroad as well! Her strength in her ordeal at the house and the grace she display earned her numerous fans.
In 2009, Shilpa married businessman Raj Kundra and officially became Shilpa Shetty Kundra. She recently became a proud mother of a baby boy. She was released from the hospital just a few days ago.
BollyCurry wishes her all the best into her journey into motherhood and also wishes this diva a very happy birthday and numerous more to come.